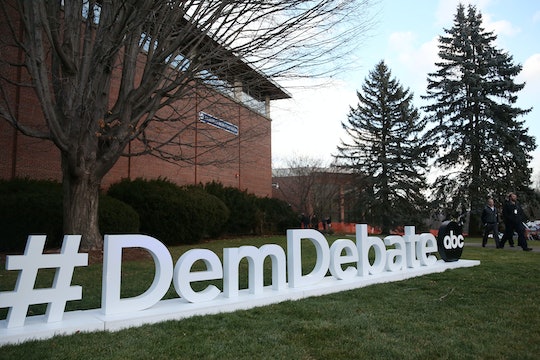 People love to watch presidential debates. They just do. The Republican debates are a little more exciting because they are on weeknights and the characters are a little more, well, colorful. But Saturday’s Democratic debate spurred a lot of conversation, especially on social media. It was intriguing enough that celebrities reacted to the ABC Democratic debate, taking some time from their (probably pretty glam) holiday weekend to comment on the pols' performances. Hillary Clinton has a strong Hollywood following, with Lena Dunham and other female celebs in her corner. Bernie Sanders also has a small cult following in Hollywood, and his battle with the Democratic National Committee this week gave commenters a lot to talk about.

Moderators David Muir and Martha Raddatz opened the debate with some tough questions. Although the CNN GOP debate earlier this week drew lots of jokes and criticisms — even the opening theme was over the top — ABC’s debate had a tamer tone. But that doesn’t mean celebs kept quiet. If the Republican debate was all about Donald Trump and his crazy ideas about closing the Internet, the Democratic debate was about, well, Donald Trump. And Hillary’s delivery, how much Bernie Sanders needed to pull through, and sympathy for poor Martin O’Malley. The celeb Twitter commentary started early in the debate and kept on going.

Here are some of the best celebrity reactions to the ABC Democratic debate on Dec. 19:

Some Thought Hillary Took Too Long On A Break

Even The GOP Showed Up

Hollywood sometimes gets into trouble when they talk politics. But when they watch the debates with the common-folk, it's much more fun.