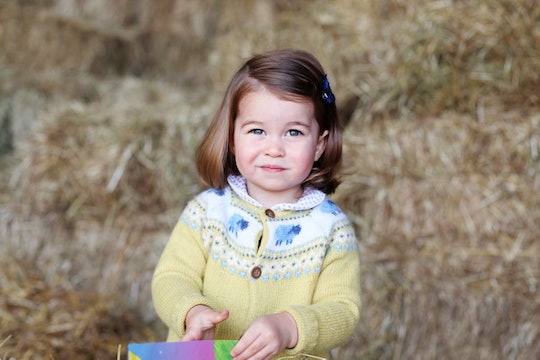 Princess Charlotte was born on 8:34 a.m. on May 2, 2015, in London, England, Biography.com notes. According to her birth register, her full name and title is Her Royal Highness Princess Charlotte Elizabeth Diana of Cambridge. Her parents, Prince William and Duchess Kate Middleton, announced they were expecting their second child, little Charlotte, in September 2014. The couple decided to announce Middletons' pregnancy on the early side, so they could explain why she had to cancel an engagement at the last minute — she was suffering from hyperemesis gravidarum, a severe form of morning sickness. Middleton also had hyperemesis gravidarum during her pregnancy with George (and she has also been experiencing it during her third and current pregnancy).

But Prince George and Princess Charlotte turned out so dang cute that it was probably worth dealing with the horrible morning sickness.

Princess Charlotte made her public debut less than 10 hours after she was born, according to E! News. Prince William and Middleton (looking unbelievably flawless, especially considering she literally gave birth that morning) greeted the press from the steps of St. Mary's Hospital with little Charlotte nestled in her mom's arms.

Just over a month later, Princess Charlotte posed for her first photo shoot with big brother George. The gorgeous photos were taken by their mother.

As she continued to grow, Princess Charlotte made a name for herself as quite the little fashionista. In honor of Princess Charlotte's first birthday, Kensington Palace's Instagram released a few portraits the Duchess took of her daughter, in early May 2016.

Here are some more shots of the little princess from 2016.

I mean, how freaking cute are those outfits?! Many outlets have written about Princess Charlotte's fashion sense, which is really no surprise, considering how well she dresses.

In addition to her fashionable sensibilities, Charlotte has also become known for her fun-loving, goofy attitude. In September 2016, she delighted spectators by horsing around with a dog named Moose while on a royal visit to Canada.

When Princess Charlotte turned 2, her mother commemorated the occasion with another gorgeous photo shoot. Not only was the photo a hit, but so was the John Lewis cardigan she is wearing in it. The sweater sold out shortly after the photo made its debut on Instagram.

During the summer of 2017, the family embarked on a royal adventure through Poland and Germany, giving Princess Charlotte a taste of the trips she'll probably get to go on for the rest of her life as a Royal.

In December, Kensington Palace shared the photo that Their Royal Highnesses sent out on their 2017 Christmas card. It's clear that the (very coordinated) family has a strong bond, and that Princess Charlotte is growing up swimmingly.

At about two years younger than her brother, Charlotte has probably been a little bored since George started attending school. Luckily, she got to enroll in a nursery school of her own in January 2018 — and fans were treated to not one but two incredibly adorable photos of the little princess on her first day, both taken by the Duchess.

Confession: I have never worn an outfit this coordinated in my entire life and I'm low-key jealous of this toddler.

Charlotte is attending Willcocks Nursery School in Kensington, and her program reportedly costs nearly $6,500 per term. Her enrollment comes at a convenient time for mom and dad, considering they'll be welcoming their third child within the next two months. Here's hoping a new adorable family photo with all five members is on the horizon.