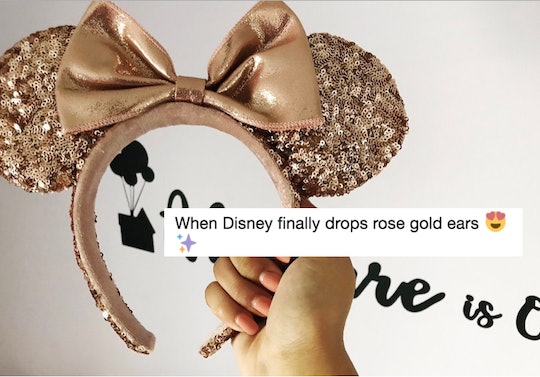 People Are Totally Freaking Out About These Rose Gold Minnie Ears

Who would have thought that anything could make Disney World any better than it already it is? Apparently, some very savvy merchandise stylists. Now you can buy rose gold Minnie ears at Disney theme parks, so all of your millennial pink accessory dreams can now be realized. If nothing else, they're basically made for selfies, if Instagram is any indication of how many people are already totally obsessed with the sequined headband and bow.

If you want a pair of the trendy-colored ears, you're going to have to head to Walt Disney World or Disneyland Resort for the quintessential Summer 2017 souvenir. (Or ask the family down the street taking a Disney vacation this year to stuff a few extra pairs in their suitcase for the #neighborhoodsquad.) Because as of right now, they're only available at the two parks.

Currently, there are other Minnie Mouse ear available in the online store. There's a sparkly version of the original black ears with the red polka-dotted bow in the middle, a pair of plain satin pink ones, and some silver and gold sequined Minnie Ears, among others to buy for just under $30 on the official Disney store site.

The rose gold ears aren't listed on the official store page yet, but it's worth checking back in since they just launched last week. These rose gold Minnie Ears are next level and perfect gifts for kids and grownups alike. Seriously — are these office appropriate?

On social media, park goers, and some celebs, are already showing off their own set.

Take A Look At These Beauties

It's great that there's yet another reason to head to Disney theme parks with the family so that the kids can meet their heroes, but planning a vacation to Walt Disney World is no easy task. Mainly because the costs are super prohibitive. Recently, Nikki Smith, a mom of two girls, set up a GoFundMe account to pay for her family's trip to the happiest place on Earth.

Initially, the Bristol, England-based mom confronted backlash from internet commenters and trolls when her fundraising efforts went viral. After briefly taking her page down, Smith relaunched it, writing:

I’m traumatized by the abuse and negativity I have received and only put this back up because a lot of people said I should. I won’t let anyone bully me into taking it down. Online trolls are hurtful and cruel, I haven’t hurt anyone and I was only trying to fulfill my children’s dreams.

After putting the page back up, she eventually surpassed the goal needed to send her family to the park. Which is good news — whose kids don't want to go to Disney World or Disney Land? Hopefully the Smith family scheduled their trip around the launch of these new rose gold ears. And they, like every other family headed to Disney sometime soon, allot some money in the vacation budget for these millennial pink Minnie ears. Rocking those two are really a dream come true.