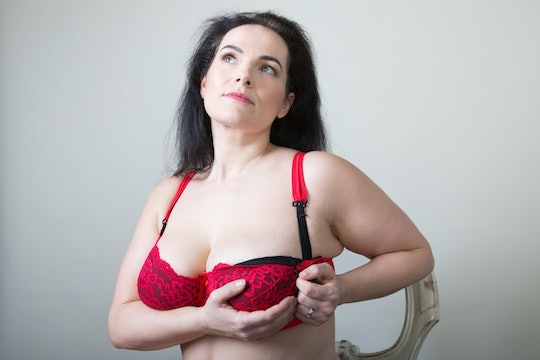 In late December of 2016, I found myself sobbing quietly on my bed one morning as my 2-week-old napped beside me. I was hoping to get dressed that day (a feat I hadn't managed since coming home from the hospital), but I was stuck. Normally, slipping into a bra and underwear would be the first step to forming an outfit, but here I was: covered in dozens of my old push-ups and bralettes, realizing that none of them would make suitable plus-size nursing bras. None had cups that clipped on and off with ease in order to present a baby with a boob at any given moment. None could see me through this tumultuous, sleep-deprived, anxiety-riddled new chapter of my life. At the time, the existence of something like Viva Voluptuous' plus-size nursing bras would've seemed like yet another fat girl's flight of fancy.

I had spent much of the latter half of my pregnancy searching for plus-size maternity bras in order to avoid the very frustration I was now experiencing. Every day, I Googled. Every day, I wanted to smash my laptop against our stone fireplace. There was nothing. Each promise of a plus-size collection for hot mamas yielded, at best, pieces in extended cup sizes but not band sizes. At worst, they presented some problematic brand's attempts at making their size S-XL size range seem somehow all-inclusive.

At a 46C bra size and a 3X/U.S. 22 dress size, I resigned myself to trying to make my pre-baby bralettes work. The underwire-free beauties were at least more malleable than some of my lingerie, so maybe I'd manage.

Eventually, after several desperate social media rants, someone told me that Curvissa (a U.K.-based company) sold a couple two-packs of maternity bras in my size. And it was true. My band size was, in fact, their largest size. I ordered immediately, and when the package arrived at my door in a few days time, I felt a sense of relief inundate my exhausted, emotional, post-baby body. Finally, some kind of sartorial acknowledgement of my existence; of the simple reality that many fat women have sex, and have babies, and choose to nurse those babies.

Those bras served me well through 15 months of breastfeeding my eldest. Four months later, however, I welcomed a second baby girl into my life. In a lot of ways, preparing for her arrival was easier than preparing for her sister's. I had been through the internal upheaval that is going from no kids to one kid, and was sure that I could get through the highs and lows of this sh*t-show once more.

As I cradled my newborn in my arms at the hospital, though, I reached for my trusted Curvissa bras, only to realize how ugly they'd become. They were never that great to begin with, of course. They were simple, cotton creations made with practicality in mind (and little else). Now, they had faded. The pink one had become beige. The white one had too, actually. They were stained. They were tatty. They had never made me feel "sexy," per se, but now they made me feel washed-up and disheveled. In them, I was not so much a whole person as I was someone's tired, fed-up mother who'd stopped taking care of herself; who no longer bothered to treat herself to pretty things. Who, maybe, didn't think she deserved pretty things anymore.

Then, a few months into nursing my youngest, something happened. Viva Voluptuous, a lingerie brand with both U.K. and U.S. bases, and with a team of all female directors and designers, changed the game. I could scarcely believe it when Hollie Burgess, a fellow plus-size blogger and mother of two under 2, shared an Instagram photo of two sexy, lace nursing bras made specifically for plus-size babes by a plus-size brand. One was a deep blue; one a bold, sultry red and black. Neither was like anything I'd seen in all my research; like anything I'd encountered in countless conversations with plus-size brands and maternity-wear specialists and fellow fat moms. There had been so many hours lost to the internet; lost to the reminder that fat people are still all but invisible to so much of the fashion industry.

"We regularly work with some amazing plus-size bloggers and one day at an event, Hollie Burgess told us about her two babies, and how plus-size women struggle to find pretty nursing bras," Liz Willis, President of Viva Voluptuous, tells Romper over email. "Once I did research, I was shocked at how ugly nursing bras are. It's a time that women struggle [...] they are tired and often don't feel very sexy. And quite frankly, the state of the nursing bras available does not help their plight a bit."

"I was outraged and thought it could not be that difficult to make something gorgeous," Willis adds. "Our factory in Europe is very experienced in making nursing bras, but even their fabrics were a bit like 'granny curtains.' I sat down with them, and we chose more beautiful fabric and colors."

The nursing bras are undeniably gorgeous. After nearly two years of being confined to the same boring, cotton pieces that were sort of, kind of cute-ish, but not really, donning Viva Voluptuous' nursing bras felt like a revelation.

Viva Voluptuous' nursing bras ($36) start at 36D and go up to 48 with a range of larger cup sizes. However, Willis is more than happy to order specific sizes for customers as she works to extend the brand's size range all around. "This is a new 'line' for us, and we'd love you to guide us and tell us what you need," she says. "If you do want a size that we do not have, give us around three to four weeks to get it made and delivered."

She hopes that, soon enough, every style at Viva Voluptuous will be available in band sizes 50 and 52 as well as custom measurements.

The fact that, at a 46C, I could only find one brand making nursing bras in my size continues to baffle me. There are so many women being excluded. So many mothers being made to feel like they do not matter; like their needs do not matter. So many larger fat babes with no options whatsoever. There are so many of us navigating the complete shake to the system that is first-time parenthood without access to this basic garment that could make our lives so much easier should we want to breastfeed.

"It's a fact that 67 percent of American women and 55 percent of British women are plus size," Willis says. "So really, we are the norm, not the exception. I think the Body Confidence Revolution is changing attitudes a bit, but not fast enough."

The thing is, the greater fashion industry's exclusion of fat people isn't just about wishing we could wear all the latest trends. It's not about trying to convince everyone raised in a fatphobic culture to suddenly find fatness attractive, or to want to be fat themselves (these are genuine criticisms of size acceptance advocacy that I've received, FYI).

Oftentimes, the greater issue at hand is accessibility. We exist. There are a lot of us, actually. And we should be able to participate in everything so many of our thin counterparts participate in effortlessly.

Maybe it's being approved for healthcare. Maybe it's walking into a job interview without acute awareness of the fact that hiring managers don't usually like fat people. Maybe it's being able to go to any restaurant and know that our bodies aren't going to be in physical pain because the booths are too tight or the arms of the chairs too narrow.

Sometimes, it's finding a well-fitting nursing bra. It's the access to something that makes you feel like a multi-faceted, worthwhile human being. A mother, and an individual. It's having a sexy bra that you can just so happen to feed your kid in, too.

More Like This
Ashley Graham On The “Fun, Organized Chaos” Of Raising Twins
Adult Gymnastics Brought Me Back To Myself
40 First Mother’s Day Instagram Captions
Celebrating Your First Mother's Day? These Quotes Say It All