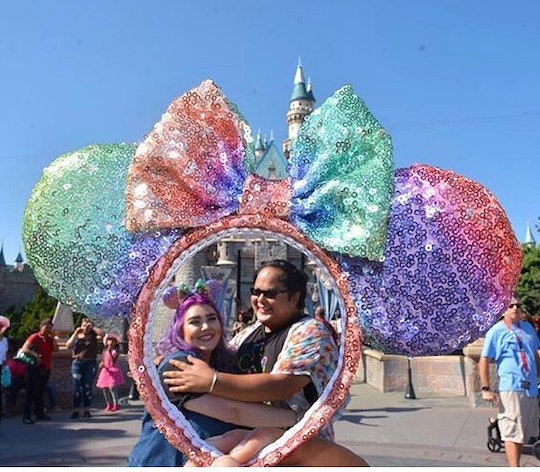 Disney's new rose gold Minnie ears are taking over Instagram, but the super-exclusive souvenirs are nearly impossible to get ahold of IRL. Seriously, they're sold out at Disney's theme parks, the only places where they were officially available in the first place. But Disney lovers can still get that magical Insta-shot using other Minnie props, too. For example, these unicorn Minnie ears are absolutely fabulous — and, unlike the hot rose gold iteration du jour, they are super easy to purchase online.

Yes, you could comb sites like eBay and Craigslist to buy the Disney rose gold ears at majorly inflated prices. Or you and your kids can look just as rad rockin' a cascade of unofficial versions, especially the new rainbow unicorn ones from a self-described "die hard Disney fan."

The rose gold Minnie ears exploded into a cultural phenomenon this summer, with a catch: Disney was selling them only at its Disneyland and Walt Disney World theme parks. Their undeniable made-for-Instagram beauty made it pretty much inevitable that they'd sell out quickly, so it's no surprise that they won't return to the parks until October, as Allure reported.

Luckily, independent sellers like Elizabeth, owner of Lizzyz Bowtique, are filling the void with their countless creations. Case in point: The glittering work of art that is the Unicorn Rainbow Sequin Minnie ears.

These snazzy ears actually made their debut on Lizzyz Bowtique's Instagram back in July, before Disney even introduced its now-famous rose gold ears that have children and millennials alike freaking out. Now that the rose gold ears have fueled the public's appetite for new spins on the classic ears, the unicorn ones are perhaps more relevant than ever.

If you don't have a Disney vacation scheduled for October or later, tons of handmade ears and other related products are available on the Bowtique's website. And you can snag the Unicorn Rainbow Sequin Minnie ears on Etsy for $40. That's a little pricier than the $24.99 Disney Store is charing for its classic black and red sequined Minnie ears headband, but, you have to admit, the rainbow ones are a lot more eye-catching.

Honestly, browsing through all the different types of Minnie ears available for purchase at this one online Bowtique — Beauty and the Beast-themed ears, anyone? — and elsewhere might just inspire you to start a collection of your own. Seriously, a little sparkle never hurt anyone. And hey, just imagine all the Instagram possibilities!