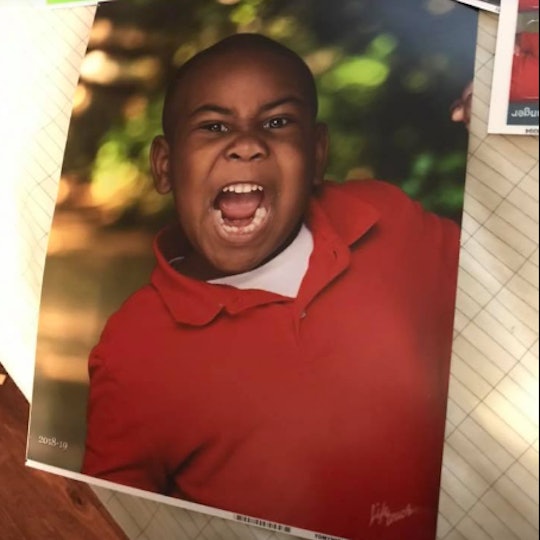 I don't know about you but I have often found my kids' school pictures to be a bit off. It's not the fault of the poor photographer who has to spend every day trying to make legions of kids look normal. I think it's just the idea of making all of those hilarious, bright, unique kids look uniform. I remember one of my sons had to do this pose with his chin in his hands looking pensive and I was like, Who is that kid? He was not known for being pensive. Which is why I love this 5-year-old boy's school photos... he is clearly being completely himself (mid-scream even, methinks), and that is just about the most beautiful thing you can capture with a camera.

More Like This
Is The Tooth Fairy Real?
Vaccinated People Can Ditch Masks. Where Does That Leave Kids?
Apple Card Family: How It Works & What Your Kids Can Learn
Attorneys General In Nearly Every State Oppose Facebook’s “Instagram For Kids” Plan

Stronajai Miles from Atlanta, Georgia was a little surprised last week when she had a look in her son Andrew's school bag. Instead of one of those poses sitting straight up, smiling politely at the camera, Andrew had his mouth wide open looking like he was roaring or screaming and was all tilted. At first, she wasn't impressed. Miles explained to Inside Edition, "It was a regular Sunday night and I was going through his book bag making sure I didn’t have to sign anything for the next week. I was totally not expecting to see the pictures. I said, ‘OMG. They let him take his pictures like this!'”

Miles shared the pictures on Facebook... and got a little insight. More than 50,000 people liked the photo on the social media platform, and the pictures have been shared 41,500 times. The comments from Facebook users have all been supportive of little Andrew who was just being himself.

This young man is going to definitely be a leader NOT a follower! I understand as a mom you wanted the perfectly poised pic but just remind him next year as his Mom one of the BEST gifts he can give you is a photo holding back his desire n posing how Mom wants...wish I could get one for my wallet I LOVE THE PIC!

I would definitely keep them, he is life, its just part of his personality, let it shine through

Miles has since embraced the pictures and explained why she was initially upset about them to The Epoch Times, saying:

When we were kids, you could not mess those pictures up. Those pictures were so important, but times have changed. I have to get out of the ’90s and get with everyone else.

While she has reached out to the company to either have the pictures retaken or perhaps a photo shoot, as per TODAY, she can see now that those pictures were all about her son's sweetness:

That's definitely Drew. He is a character. He has taken pre-K photos that all came out nice, and I'm just like, 'What happened here?' He's a sweet kid.

I really love that school photographers are just letting kids be kids these days. It has to be easier on everyone except sometimes maybe the mom who was expecting something more traditional.

I guess we'll all just have to go with the flow.