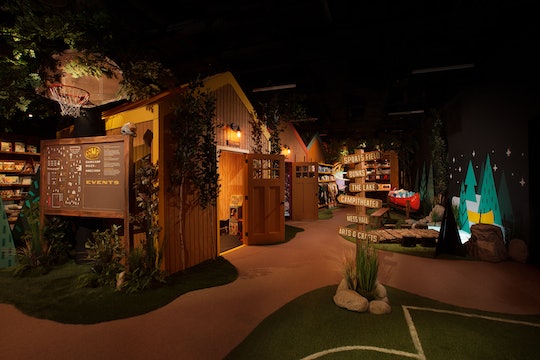 This Amazing New Toy Store Is Your Kid's Next Obsession (OK, Yours Too)

I'm normally a fairly non-materialistic parent. However, there are a select few stores at which I'm totally okay with saying, "Just take all my money!" Target, of course. Because irresistibly cute decor/clothing/Starbucks coffee is a lethal combination for my bank account. (And you can bet I let my kids go crazy at the dollar store.) However, I can almost guarantee this amazing new toy store is your kid's next obsession. And it just might be yours, too.

The store is called CAMP — and it just opened its doors on Saturday, Dec. 15 in New York City. But it isn't just your run-of-the-mill toy store. Not by a long shot. Sure, the Canteen at CAMP offers gifts, toys, and apparel from Sunnylife, Kid Made Modern, Tegu, Rockets of Awesome, Primary and more — all strategically placed at eye-level, Fox 5 NY reported. And did I mention there are also s'mores ice cream sundaes by Milk Bar? However, once you step behind CAMP's secret door, that's where the true magic begins. Because CAMP is more than a toy store; it's an experience. Behind the secret door, visitors are transported to summer camp, complete with a "campitheater," a sports field, dance hall, arts and crafts, real bunks, a musical dock, radio lab, edible bubbles, and more.

Ben Kaufman — who happens to be BuzzFeed’s head of commerce — is CAMP's CEO and co-founder, according to the New York Post. "We thought it would be amazing to build a store that was great for people to experience together as a family," Kaufman told Fox 5 NY. "And find gifts and toys and apparel, and all sorts of things that they can both buy and do — all within four walls."

One of the especially cool aspects of CAMP is the theme will be rotated every few months or so, the New York Post reported. As the publication explained, that means the store could be decorated like a jungle and selling jungle merchandise during one visit — and then by the next time kids stop by, it could have an ocean theme, or a holiday theme. So although the current setup is "summer camp," it'll be switched up by the time March rolls around.

“At Milk Bar, we’re always looking to push creative boundaries and reach people through innovative, even unexpected, experiences," Sujean Lee, COO of Milk Bar, said in a news release. "We’re excited to collaborate with Ben Kaufman and Buzzfeed on launching this new retail experience, where play and adventure will really come to life."

I don't live anywhere near NYC, but this new toy store sounds like an absolute dream. Who knows? Maybe the concept will catch on and before we know it, there will be CAMP stores popping up across the nation. In the meantime, if you live near NYC (or plan on visiting in the near future,) and need something cool to do with the kiddos, I would definitely plan on stopping by CAMP. It's located at 110 Fifth Avenue in Manhattan. Let me know what you love most about it!