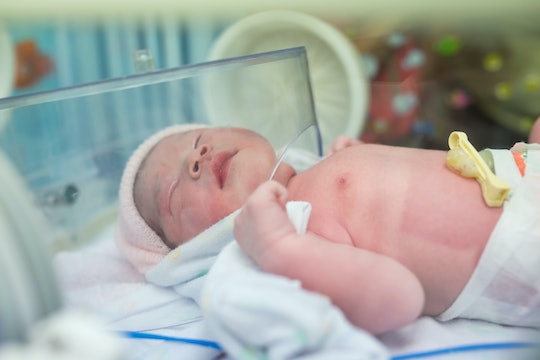 This Premature Baby's Touching Story Is A Must-Read For Parents

It's a pretty incredible story: a San Antonio 3-year-old is now thought to be the the most premature infant to ever survive, after being born at only 21 weeks and 4 days gestation and weighing only 410 grams. Her mother, Courtney Stensrud, is now sharing the details of her daughter's birth in light of a recent Pediatrics case study that outlined her remarkable survival, and which challenges the previously-held notion that babies simply won't make it prior to at least 22 weeks. But while this baby born at 21 weeks gestation has beaten the odds, it's also important to keep in mind that she is definitely the exception, and not the rule.

Although no woman ever expects to deliver a baby when she's only barely reached the halfway point of her pregnancy, Stensrud told TODAY that she developed chorioamnionitis, an infection of the placenta and the amniotic fluid, following preterm premature rupture of membranes (known as PPROM), which ultimately forced her delivery. But at 21 weeks, Stensrud hadn't even yet reached the generally-accepted point of viability in her pregnancy, usually considered to be around 24 weeks, an data from the American Congress of Obstetricians and Gynecologists (ACOG) shows that, even at 22 weeks, Strensrud's daughter would have a 97–98 percent chance of dying. But despite the overwhelming odds, Strensrud asked her doctor, Dr. Kaashif Ahmad, if he would at least attempt to keep her alive — and ultimately, he agreed.

Strensrud's daughter did survive, and after a four-month stay in the neonatal intensive care unit, she went home with her parents in Nov. 2014. Today, Stensrud said that, her daughter is happy, full of energy and full of life," with no cognitive impairments, ongoing medical issues, or disabilities. In other words, the little girl's recovery was nothing short of straight up miraculous. Yet, as heartwarmingly wonderful as this story may be, doctors — including Stensrud's OB — are emphasizing that, when it comes to premature birth, the reality is often much more complicated.

Premature delivery is a big problem in the United States. According to the Centers for Disease Control, in 2016, nearly 1 in every 10 babies in was born premature, and according to the National Institutes of Health, prematurity is also the second-leading cause of infant death after birth defects. And while all babies born prior to 37 weeks are at risk for complications from prematurity, it's the extremely preterm babies (those born before 28 weeks, according to ACOG) that face the biggest hurdles.

For one, ACOG has noted that in order for extremely preterm babies to survive, they will have to be resuscitated after birth, as their lungs and hearts are often incapable of functioning without assistance. Many will also need the ongoing help of a ventilator to continue to stay alive. Yet even when resuscitated, most babies born at 23 weeks or earlier still do not survive — which is why doctors often also offer parents the option to give their infants "comfort care" measures instead of life-saving intervention.

But initial survival is far from being the only concern: according to the March of Dimes, extremely preterm babies often develop bronchopulmonary dysplasia, or chronic lung disease, as a result of lung damage caused by necessary ventilator use. They are also at a greater risk of being born with a heart defect, and are more likely to develop a potentially life-threatening infection, like pneumonia or meningitis. Other serious issues for preemies include necrotizing enterocolitis (NEC), a potentially-fatal complication involving the intestines; retinopathy of prematurity (ROP), which can cause blindness or other vision problems; hearing loss; or intraventricular hemorrhage (IVH), bleeding in the brain that could lead to other complications, such as hydrocephalus.

Long-term, premature babies are also at a greater risk for intellectual and developmental delays compared to full-term babies, and are more likely to experience behavioral issues (including ADHD), or other disorders including cerebral palsy and autism. And the risks don't disappear after childhood: in addition to any lifelong disabilities, a recent Canadian study found that babies born premature are also more likely to experience mental health problems as adults.

In other words, while Stensrud's daughter has proven herself to be a medical miracle, and while her story is absolutely worth celebrating, the reality of prematurity for most parents is often much more heartbreaking, even for babies born much later than 21 weeks. Although the advancements in medical technology and best care practices in NICUs have meant that more babies are surviving at earlier gestations, there are still so many who don't. And of those that do, disability and lifelong health conditions are often a part of life.

Although Stensrud declined to share her daughter's name or any current photos out of respect for her privacy (which is totally understandable), she did say that she hoped that her story could provide "a little bit of hope and faith" to all the other worried mothers out there facing the reality of an extremely pre-term birth. And as a mom of twins born at 25 weeks, it's something I can absolutely understand. I've never felt so helpless as when I was lying in a hospital bed, praying that I wouldn't go into labor for as long as possible, for example, and I've never Googled harder for happy ending stories about 25 weekers with intraventricular hemorrhages than when my own daughter's brain bleed was discovered.

But as valuable as those happy ending stories are, they can also have the unintended consequence of downplaying just how huge an impact that prematurity can really have on babies and families. While it can often seem to outsiders like preemies are just tiny babies who need a little extra time to grow, the reality is that they often face many challenges, even long after they look like they've "caught up" to their peers. So while Stensrud's story definitely deserves to be marveled at — and while it's absolutely wonderful that her daughter emerged unscathed — it doesn't at all mean that babies born at 21 weeks will be just fine. For now, it just means that in this one, beautifully amazing case, that is somehow how it happened to work out. Even despite some seriously devastating odds.