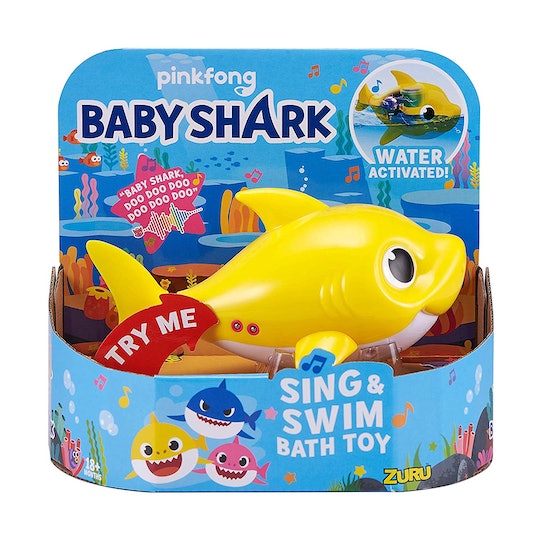 You may have thought that Baby Shark by Pinkfong! and the bathtub were mutually exclusive. Afterall, you can’t play a Youtube video in the bath, that’s a disaster waiting to happen. I, an adult with relatively steady hands, once ruined an iPad trying to watch The Real Housewives Of New York in a bubble bath, so learn from me. But now, you and your toddler can finally rest your vocal chords and let this Baby Shark bath toy do the singing in its natural habitat. This is great news, because regardless of how you feel about every pre-schoolers' favorite song, there’s one sure way to have the do-do-dos stuck in your head for days, and that’s by singing it aloud (or by writing about it, which I just learned this minute…)

Not only does this battery-powered Baby Shark bath toy sing, it swims when dropped in the water, which adds the perfect element of fun entertainment for kids that may be wary of sitting still in the tub or getting soap in their eyes. Batteries are included, thank god, because you don’t want to be digging through old remotes and calculators to get this little shark to sing.

A recent report by Polygon said that on YouTube, “The top 10 'Baby Shark' videos amass almost 5 billion views in total, making the catchy song the number one trend in the Education tag ever.” Granted, at least one billion of those views came from the toddler with whom I used to share an apartment wall, but still that amount of hits is usually reserved for the likes of Katy Perry and Justin Beiber, not an animated family of marine creatures.

It makes sense that toys of all kinds would follow in the wake of such a runaway hit. You can also buy hand puppets and fingerlings featuring the world’s most famous family (mover over Kardashians). The bath toys, made by Robo Alive Junior, include a yellow Baby Shark, a pink Mommy Shark, and a blue Daddy Shark (sold separately) so you can have a complete crooning family making bath time ridiculously fun — for your toddler at least; you'll probably still end up soaking wet from the torso down.

Baby Shark, no doubt, appears to be the fan favorite (sort of like Beyonce in Destiny’s Child, and I mean no shade to Kelly or Michelle). The baby bath toy retails for $24.99, which is $10 more than mom or dad. The littlest one is also going fast, with only a few left in stock, but don’t worry, you can still snag mommy or daddy bath toy while supplies last (and expect the price to rise drastically on eBay and other secondhand retail markets if the toys do sell out.)

In case you’re worried about the Baby Shark bath toy playing on an endless loop (which would be an absolutely valid concern and if I were to be kidnapped by pre-schoolers I suspect they’d use this tactic), the toy comes with power save mode, where it turns itself off after singing the song for four minutes. Just pick it up out of the water and drop it back in to reset the song. But I won’t blame you if you doo-doo-don’t tell your toddler that bit of information.

More Like This
Is The Shark AI Ultra Robot Vacuum Worth The Price Tag?
The 11 Best Fidget Toys For Every Age
The 35 Top Toys For 3-Year-Olds
The Bath & Body Works Candle Day Sale Is Here & It's *Good*