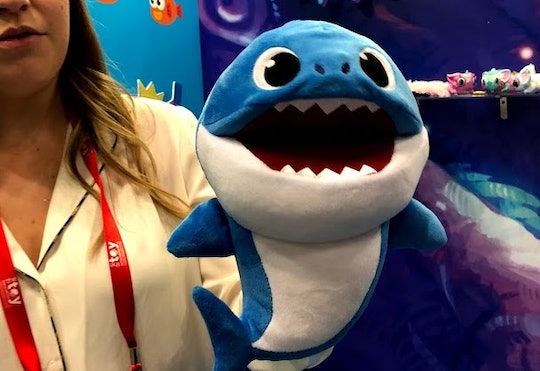 Depending on how you feel about Pinkfong!'s version of "Baby Shark" — the super catchy, super repetitive song that kids legit can't get enough of — I either have some very good or very bad news for you. Baby shark hand puppets are coming, and your kid is definitely going to want one.

The original "Baby Shark" video by Pinkfong! has wracked up more than two billion views on YouTube (including what feels like a million or two at my house), and its mega success has lead to a popular line of kids' toys. The latest offering is an adorable hand puppet, but with a fun twist. The puppet will sing the song to you over and over and over again, but if you move your hand slowly, the shark will sing in slo-mo. Move its mouth a little faster, and it'll speed up the singing. You can get a mommy shark, daddy shark, or baby shark hand puppet, or get all three and conduct your own little shark choir.

The "Fast N' Slow" singing puppets by WowWee are set to launch in August, and they'll go for $20 each. If recent history is any indication, there's a very strong chance they'll be a hot seller. Their Baby Shark toys that were released in December were a huge hit, selling out almost instantly according to People. The singing plush dolls were being re-sold for as much as $80 around the holidays. They're normally about $17. The sound cubes, meanwhile, fetched as much as $50 leading up to Christmas — originally they retail for a much more reasonable $8.

The hand puppet isn't the only new toy WowWee is rolling out, either. Throughout 2019, expect to see shark-themed slap bracelets, walkers, shape sorters, and more. But the hottest new item might be the Baby Shark Fingerling, which will also drop at the end of the year. It'll sing the song, have a light up fin, and play ocean sounds when your child makes it dive. Like other Fingerlings, you can also give it a kiss to hear a big smooch in return. It will be in stores for $14.99 in October, a WowWee rep tells Romper, so yea, it's likely going to make an appearance on your kid's holiday wish list. (Don't forget to snag yours before the price gouging inevitably begins).

For little ones that need their Baby Shark fix sooner, there are some other options that are available now. There's a line of sound books and a set of very adorable matching family T-shirts for grandparents, moms, dads, and baby sharks. I can definitely see those being a hit around Halloween. There's also a shark-shaped melody pad that plays 16 different songs, which might slightly decrease your odds of hearing "do do do do do do" all day long.

If you're absolutely sick of hearing "Baby Shark" by now (and who could really blame you), there's at least one good reason to let your kid keep on listening. Simple, repetitive songs (and I'm pretty sure there are few songs as repetitive as "Baby Shark") can be beneficial for your child's language development, according to speech pathologists. But they're most beneficial when you're singing and dancing right alongside your kid, so you might want to order a Baby Shark hand puppet for yourself, too.