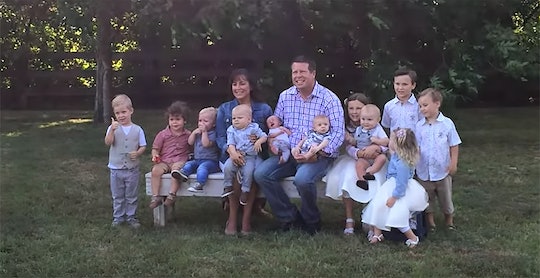 It's no secret Michelle and Jim Bob Duggar have a lot of grandkids. In fact, the couple became grandparents to a whopping 12 kids following the recent Duggar baby boom. Throughout the span of six months, Michelle and Jim Bob welcomed three grandbabies in total: Gideon Forsyth, Garrett Duggar, and Felicity Vuolo. And to celebrate their abundance of grandchildren, Jim Bob and Michelle recently posed for a photoshoot with most of their grandkids (Felicity hadn't made her debut yet) in tow. Of course, pulling off a photo op with 11 kids under the age of 9 is no easy feat, and this behind-scenes video of the Duggar grandkids photoshoot proves just how difficult it was for Michelle and Jim Bob to pull off. From the crying babies to the disinterested toddlers, there's a good chance parents will find this hilarious video pretty relatable.

Even if you follow the Duggar family's story, it can be difficult to keep track of how many grandkids they have at the moment. But now that the Duggar baby boom is officially over, it's a little less complicated. As of August 2018, Michelle and Jim Bob are grandparents to: Mackynzie, 8, Michael, 7, Marcus, 5, Israel, 3, Meredith, 3, Spurgeon, 2, Henry, 1, Samuel, 1, Mason 10-months, Gideon, 5-months Garrett, 1-month, and Felicity, 18-days. Phew, talk about a full crowd.

Considering Michelle and Jim Bob are all about their big family, it's no surprise they organized a photoshoot with their grandkids sometime in June. As for why the grandparents decided to take the snap around this time, I suspect it was to celebrate the family's special life events in July. Jim Bob celebrated his birthday on July 18, and the couple celebrated their 34th wedding anniversary on July 21. There's no better way to celebrate meaningful milestones than with a family photo op, right?

"Grandparents with their darling grand babies!!" Jim Bob and Michelle captioned an outtake from the shoot shared to their Instagram account on July 11.

As you can probably already tell from the shot, the photoshoot was a bit hectic. For starters, there are multiple infants present, one of which is crying. As for the gaggle of toddlers, only a few of them are actually looking in the direction of the camera. Oh, and how could I leave out Jim Bob's closed eyes in the snap? The pic perfectly sums up the chaos of taking a family photo with young kids present.

But wait — the mayhem doesn't end there. Just a few weeks after Michelle and Jim Bob shared the outtake shot, the Jill and Derick Dillard's YouTube account shared behind-the-scenes footage of the photoshoot. As one can imagine, the video is loud and chaotic. The footage shows all of the Duggar parents trying to direct their kids in vain while Michelle and Jim Bob sit there completely helpless. The video is so frenzied I think I now have motion sickness from watching it.

Although there are a lot of hysterical moments in the vid, my favorite part is when the camera pans to Joy-Anna Duggar. Joy — who gave birth to Gideon just six months before the shoot took place — simply shakes her head while muttering, "Oh my goodness," at the wild sight before her eyes. Oh my goodness, indeed.

It goes without saying this video is just the tip of the iceberg of what probably went down that day. Keep in mind the footage doesn't show the prep that went into organizing the shoot (dressing the toddlers, wrangling everyone outside, setting up the pose), and I'm sure fans will get to see the full extent of the chaos in an upcoming episode of Counting On.

Either way, it's hard to deny this video is extremely relatable. No matter if you have a large family or a small one, a photo op with young kids is rarely easy.