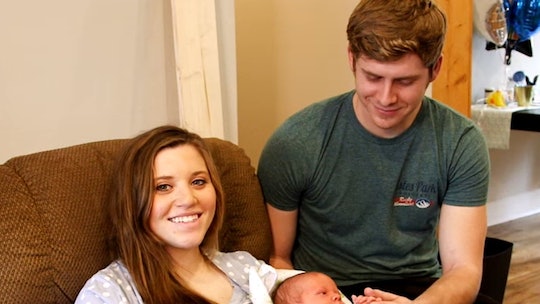 With All The Duggar Babies Being Born Lately, It's Time To Ask: How Many Grandkids Are There Now?

With her first child due any day now — a baby girl! — Jinger Duggar's expected delivery of her daughter with husband Jeremy Vuolo has likely led reality show enthusiasts to turn to their calculators (and maybe spreadsheets and protractors) to get an accurate tally of exactly how many Duggar grandkids there are now. And the results might surprise even the biggest Duggar fam fan.

Duggar family matriarch and patriarch Michelle and Jim Bob's supersized brood has not made it easy to keep up with, that's for sure. With their fun-loving tribe of 19 (10 sons and nine daughters), it seems that almost every month or so lately one of their kids is either courting, getting married, or having mini-Duggar clans of their own, with Jinger only the latest Duggar daughter (or daughter-in-law) to announce a pregnancy or birth.

In spite of all the kids, marriages and courting going on... the number of grandkids in the extended clan isn't actually too large yet. Although three Duggar grandbabies have been (or will soon be) welcomed in this year alone, the grand total is now 11, according to the last tally by In Touch Weekly! There's Mackynzie; Michael; Marcus; Israel; Meredith; Spurgeon; Henry; Samuel; Mason; Gideon; Garrett... And next, Baby Vuolo, who's name has not been shared yet, will make 12.

Joseph Duggar and wife Kendra — who themselves got engaged at sister Joy-Anna Duggars' wedding in 2017, according to People, and subsequently got hitched in Siloam Springs, Arkansas that September of that year — just had their first child June 8, an adorable boy named Garrett David, as TLC reported.

Meanwhile, Joy-Anna Duggar and husband Austin Forsyth welcomed their first baby, Gideon, back in March, as People reported and as was documented on Counting On.

As for who belongs to whom in the rest of the grandbaby department, Mackynzie, Michael, Marcus, Meredith, Mason are Josh Duggar's kids with wife Anna Keller. Then there's Israel and Samuel, who are Jill's progeny with husband Derick Dillard. And of course, Spurgeon and Henry are Jessa's littles ones with her spouse Ben Seewald.

Jinger and Jeremy — who works as a pastor in Laredo, Texas — have an active and fun social media presence. The couple just flew to Los Angeles for a gorgeous maternity photo shoot, according to Hollywood Life, and has documented what it's been like for Jinger to be in her last trimester during hot weather — not so fun as all moms who were due in the warmer months know — and their excitement over the baby's sex.

"We are so happy to announce that we are having a little baby girl!” Jinger and Jeremy gushed in a statement shared with People in April. “We could not be more excited and are eagerly anticipating meeting our little lady this summer. We especially love thinking forward and realizing that she will have excellent role models in both of her grandmothers, who cannot wait to shower her with love."

Jinger may also break with tradition by having the baby in her adopted state of Texas, while most of her siblings or sisters-in-law have chosen to deliver near the Duggar family home in Arkansas. Jinger could also welcome her little one on camera, as some of her sisters have done. (She could also opt for a home birth, something of a Duggar tradition, rather than the traditional hospital route.) However the Vuolos decide to handle their baby's upcoming arrival, they'll surely do it with a little down-home charm and presumably with a lot of family support.

And keep in mind, more Duggar babies could be on the horizon. It was announced on June 30 that 21-year-old Josiah Duggar married Lauren Swanson, who's a longtime family friend and is the oldest of eight. According to People, Josiah's big day took place at John Brown University Cathedral of the Ozarks in Siloam Springs, Arkansas.

And don't forget: John David Duggar has also just met his potential perfect match in Oklahoma, nurse Abbie Grace Burnett. In fact, the couple has reportedly "broken" some Duggar rules by going out without chaperones, according to the Hollywood Gossip, so perhaps they've already totally fallen for each other. Then there's 18-year-old Jason Duggar, who could be ready to go courting himself (and has his own house to boot), according to Inquisitr.com.

So really, there's just no end to adorable Duggar grandbabies in sight.