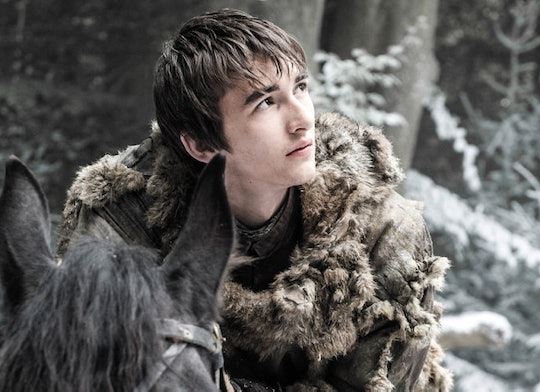 By now, fans are in a collective tizzy over the scenes in Game of Thrones where we see Bran having visions and going into the past. And rightfully so, since his trips back in time are likely to give a lot of important back story to the viewers. But after Bran saw Hodor in the past, as a kid and actually talking, it made fans think, what happened to Hodor on Game of Thrones? Of course there's about 30 years between the young teen Bran saw and the simple-minded man he knows now, but was there something else that happened because of Bran to make Hodor the way he is now?

There are plenty of theories floating around about how Hodor became the way he is, from a kid who was obviously shy and gentle but couldn't say more than his name (which, by the way, might not be his real name) to the man he is now. And not surprisingly, Bran has come up, which kind of makes sense. Bran is the closest thing Hodor has to family and they've been a solid pair since Season 1 of Game of Thrones. It would make total sense for Bran to be connected to present day Hodor's lack of speech.

The possible evidence behind the idea that Bran is responsible for Hodor being the way he is seems to be piling up. The more we see Bran delve into the past, the more we're likely to see him try to interact with the characters he's watching and that is likely where we will see how he made Hodor into the person he became. He was already something of a simple boy, but hearing or seeing someone talking to you is enough to send anyone over the edge of insanity, let alone a soft and impressionable kid like he clearly was.

Having Bran in the past calling out "Hodor!" to get his attention could be the reason for Wylis "becoming" Hodor, taking on the name of what he is hearing in his head, so to speak, and saying only that. But if that isn't enough to convince fans of the very real possibility of Bran being the reason that Hodor is, well, Hodor, here are the clues we've been privy to so far.

Viewers were as amazed as Bran was when he saw the younger version of the man, in the Winterfell courtyard and actually talking. Bran said it best when he said in wonder, "Hodor talks!" And when the Three-Eyed Raven told him it was time to go, he wasn't ready, which is understandable because none of us were ready to not be seeing that blast from the past either. But we weren't given a glimpse into Hodor/Wylis for no reason and Bran urged present-day Hodor to explain what he'd seen but there was nothing. Of course.

Bran Calling Out For Ned

In another flashback vision, Bran got to see his father fighting Targaryen soldiers with Howland Reed at the Tower of Joy. That alone was enough to make Game of Thrones fans itchy in their pants, but then we see Bran call out to Ned. And what happens next? Ned Stark actually stops on the steps of the Tower of Joy and looks back, as if he had heard Bran call out for him. This is the first time we saw Bran able to interact with the past at all, which leads you to believe that it's totally possible he'll interact with the young Hodor at some point.

Everyone loves to talk about the father of Dany, Rhaegar, and Viserys, the Mad King Aerys Targaryen, and his craziness as he ruled Westeros. He is known to have shown signs of paranoia, unnecessary cruelty, and being unpredictable. If Bran can interact with people in the past, who's to say that he also didn't try to talk to the infamous Mad King and inadvertently make him the way he is? Or, at the very least, play a large part in it. One Redditor put this idea out there in the simplest way:

"Bran realizes that others can hear him during the visions from the past, but doesn't understand that they cannot fully understand him. He attempts to reason with King Aerys when shown a vision of him. The King only hears whispers, and is driven mad by it. Bran tries to fix this, however makes it worse. Mad King Aerys burns Bran's grandfather alive while Bran frantically tries to stop him. All he hears is whispers. Bran sets the events of the show in motion."

Season 6 Episode 5 of Game of Thrones shows Bran in yet another vision, this time with the Night's King and an entire army of white walkers around them. The next and only other shot is on the walker touches Bran's arm. This is the closest he's ever come to truly interacting with someone in one of his visions, which could mean that his part in making Wylis into Hodor is all the more possible.

So what happened to Hodor to make him the way he is? And did Bran actually turn him into the man who is currently his travel companion and caretaker? He's been shown in Bran's vision, cementing the fact that his past does matter, and he's one of the few who have survived Game of Thrones for every single season until now. Hodor is definitely important.