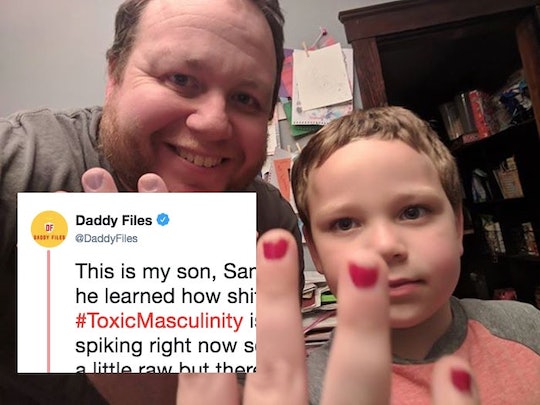 After His Son Was Bullied For Wearing Nail Polish, This Dad Is Crushing "BS" Gender Norms

Many millennial parents are choosing to raise their young children in an environment as free from gender norms as possible, and that means doing away with the idea that certain toys, clothing, or colors are only for boys or for girls. But those important lessons can quickly unravel when they begin school and have to face classmates' snarky comments. And this dad's viral post about his son's nail polish initially served to highlight the very real impact of bullying and toxic masculinity on young boys, according to The Guardian, but it's actually ended up turning into something so much bigger. And it's highlighted the need for parents to be aware of the harmful messages they often unintentionally send to young boys.

On Monday, Daddy Files blogger Aaron Gouveia penned a Twitter thread explaining that his 5-year-old son, Sam, had been teased at school for wearing red nail polish to kindergarten. Like many kids, Sam simply thought that nail polish was beautiful, and hadn't ever considered that there was anything wrong with boys wearing it, until his classmates called him out.

It turned into one understandably heartbreaking day for him and his parents, but those on social media quickly rallied around them. And now? Their entire community is joining in to fight against outdated and harmful gender stereotypes.

Gouveia wrote that Sam "was ridiculed for being a boy with nail polish," and that some of his classmates spent the entire day "[calling] him names and [telling] him to take it off." Unsurprisingly, Gouveia wrote that Sam was "devastated" — he was in tears when his mom came to pick him up — and that his son later told him he wanted to take the nail polish off so that he wouldn't be teased anymore.

To Gouveia, the children's reaction to Sam's nail polish was a clear example of the kind of toxic masculinity boys have been taught to believe for generations. And in the thread, he explained that all it really means is that kids like Sam end up getting bullied for no reason other than wanting to have colorful nails.

Later in the thread, Gouveia wrote he told his son that, actually, there *are* famous men who wear nail polish, and in the end, Sam decided to stick with his red nails "because he likes it and it makes him feel good."

Sam's older brother also painted his nails in solidarity, and Gouveia joined in, posting a pic of his own sparkly fingernails:

But it's what happened next that is truly heartwarming: in response to the thread, male Twitters users started posting photos of their own painted nails to show Sam that there was absolutely nothing wrong with boys wearing nail polish.

Parents also shared snaps of their own young sons with colorful nails in support of Sam, while others shared pics of male celebs, like Steven Tyler and Seal, wearing bright colored polish.

And if that weren't already cool enough? Martellus Bennett, who played for Sam's favorite football team, the New England Patriots, even tweeted a photo showing off his own pink nails during a daddy-daughter at-home manicure.

The response to Gouveia's Twitter thread is amazing, and also really important: as much as toxic masculinity harms kids like Sam, it also hurts the boys who were teasing him. After all, gender stereotypes mean that all boys end up getting boxed in by completely made-up ideas about what boys should and shouldn't like instead of letting them simply be themselves. And it also means they'll have to grow into men who were taught that completely normal things like crying, liking bright colors, and wanting to dress in ways that might make them feel good is unacceptable.

Beyond that though, narrow opinions about gender and masculinity can also contribute to some much larger-scale problems. For one, studies have shown that men who adhere to male gender stereotypes are less likely to be engaged fathers, and according to The New York Times, they may also experience higher rates of depression.

Gouveia tells Romper that the response to his Twitter thread "has been overwhelming," and said that he's "forever grateful to each and every person who reached out." What's more though, Gouveia said Sam's school has also been super supportive, and that they have since used the incident as a teaching moment to benefit the students.

The love definitely seems to be continuing to spread offline: on Friday, Gouveia's town of Franklin, Massachusetts kicked off "Get Polished Franklin!" a day to wear nail polish in support of Sam, as well as to support the greater goal of fighting bullying. In fact, Gouveia tells Romper their neighbors have even "come out to drop nail stuff at our house for Sam," as a show of support.

As heartbreaking as it must have been for Sam and his parents to experience, it seems like an awful lot of good has come out of the incident. Not only has Sam learned that he has tons of people in his corner, supporting his love of nail polish, it has also gotten people talking about the need to raise kids without unfair gender messages.

And hopefully it will also be an example for many other little boys that there is nothing wrong with liking anything that was once thought of to be "just for girls."