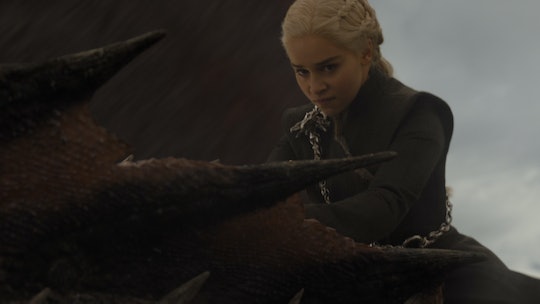 This 'Game Of Thrones' Drogon Theory Will Make You Breathe Fire

For the past few seasons, Daenerys has been regularly riding just one of her dragons, Drogon, who was named after her fallen Dothraki husband Khal Drogo. It’s easy to see why she developed such a bond with him, but this Drogon theory on Game of Thrones could mean danger for Daenerys’ beloved dragon, stemming from the fact that there are some very distinct parallels between Dany's dragon and now-deceased husband. And if I'm being honest, the idea is pretty heartbreaking.

The theory states that Drogon's death will mirror that of Khal Drogo, his namesake. In other words, according to the theory, Drogon will die the same way Khal Drogo did, and the same goes for Daenerys’ other dragons and the characters they were named after. "I loved how poetic it was that Drogon, the dragon named after Khal Drogo was the one leading the Dothraki attack on the Lannisters," reddit user Konfliction remarked. "It just seems [too] perfect that not only was Drogon leading the attack, but he also suffered the same injury as Drogo, an attack to the shoulder (albeit, opposite shoulder)."

At the end of Season 1 of Game of Thrones, Khal Drogo suffered a shoulder wound due to poison, which is eventually what ended up killing him. So while Drogon seems to be OK from his spear injury (for now), he may not be out of the woods just yet, if he truly is a parallel to Drogo.

Even though he appears to be flying around in the preview for Episode 5, during the battle in "The Spoils of War," Bronn shot Drogon with an arrow from Qyburn’s scorpion ballista, piercing the dragon’s scales. While it didn’t kill him right away, neither did Khal Drogo’s own chest wound.

But what if the arrows for the scorpion ballista are more deadly than we think? The whole thing was orchestrated by Qyburn, who helped Cersei make the poison to kill Tyene Sand and also brought back The Mountain from the dead, turning him into an even stronger killing machine than before. If the Drogon theory is right, then the spear Bronn shot into Drogon very likely had poison on it that will slowly infect and kill the dragon, allowing him to die in a similar way that Khal Drogo did in Season 1. Sure, it's kinda poetic, but also, my heart can't take it!

MoviePilot goes on to suggest that Daenerys’ remaining two dragons will die in the same vein. For example, some believe that Rhaegal, named after Rhaegar Targaryen, will die similar to Rhaegar's death with a warhammer spike slammed through his chest. And since Dany's other brother Viserys died when Khal Drogo poured molten gold over his dead, Viserion could die in a way that involves gold as well.

I don’t know if Game of Thrones is going to end with all of Daenerys’ dragons dead, but Drogon’s wound might be significant enough to lend some truth to this very scary theory.