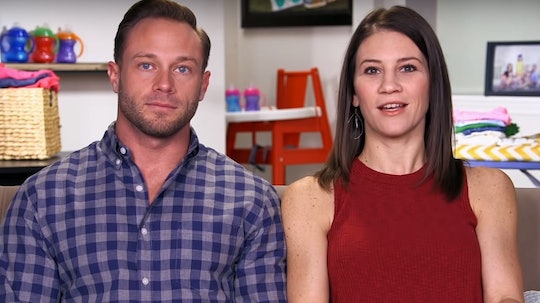 This 'OutDaughtered' Sneak Peek Makes The Busbys Seem So Relatable

Getting one toddler to keep up with chores is one thing, but trying to teach five 2-year-olds the rules of a chore chart has got to be a challenge. This exclusive OutDaughtered clip shows Danielle and Adam Busby attempting to pull off this very feat. The clip begins with Danielle and all five girls, along with 7-year-old Blayke, attempting to clean up the play room.

Danielle does her best to explain to the girls that in doing so, they’ll be rewarded stickers for their chore chart. And that 10 of these stickers will result in an elusive "surprise." As a mom, I’ve done this before. In fact, I’m currently doing it. And once your kid gets the hang of the chart and the benefits of tackling chores, it does work (to an extent).

But I really have to hand it to Danielle for trying to develop a chore chart system with a whole room full of small children instead of just one. At one point, one of the quints adorably says, "I want chore," and they each proceed to get to work. And it does seem like a solid system. When some of the toddlers are wiping down the table, Hazel is actually attempting to fold laundry. It’s pretty amazing, but what also stands out is Adam and Danielle’s interaction and differing views on the whole thing.

When Adam shows up in the OutDaughtered clip, he’s skeptical about the whole chore chart system. And with a handful of toddlers, he has every right to be. Like I said, I know what's like to do it with just one small child, but five just seems overly ambitious. Danielle explains in the clip that "the idea of the chore chart is to hopefully teach the kids responsibility in a fun way."

But Adam points out that, with two-year-olds, he doesn't "really know how much they’re gonna be able to do." He does have a point, but then Danielle tells him that the idea of it isn't to be perfect or to actually clean, but rather to get the girls in the habit of helping.

Adam also points out in his talking head interview that it reminds him of their first foray into potty training the quints. He said that, at the time, they were too young and that it was "more of a headache" than anything else.

"Part of this idea is to ease Danielle’s stress, but I have a feeling it's just gonna be more stressful on everybody," he says of the chore chart. Because of that, he sees the whole chore chart system the same way as early potty training, and their opposite opinions on the matter is something that is, to me, so normal when it comes to parenting with a partner. You won't always see eye to eye on everything and there are some things you’ll downright disagree on. But you trudge along for your partner’s sake.

In general, parents who are either together or co-parenting may have differing opinions on the important things like potty training, sleep schedules, and introducing chores to toddlers. Since Danielle and Adam have never been shy about their own struggles as parents, both together and on their own, what you see in the clip isn't anything new. But it is definitely refreshing to see on a general level. The OutDaughtered clip shows how normal the Busbys really are, even if they’re famous for having a family of six daughters and a generally hectic life. And even if the whole chore chart idea is a total disaster, the clip shows viewers that the Busbys really are just like any other family — mostly.