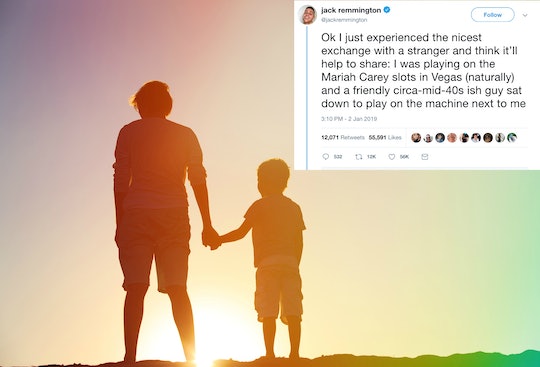 From the moment parents first set eyes on their children, they'll do everything in their power to protect and support them. But unfortunately, becoming a parent doesn't come with an instruction manual. Everyone just kind of muddles along, doing what they think is best — and hoping they're not screwing their kids up in the process. However, as babies eventually approach adolescence, some situations take a bit more strategy than others. Which is why this gay man's advice to a concerned father should be required reading for parents.

Jack Remmington, one-half of The X Factor UK duo Jack & Joel, recently took to Twitter to share a touching experience he had while hitting the slots in Las Vegas, The Advocate reported. Remmington and his friend, Marco Alessi, were sitting at a Mariah Carey slot machine when a man in his 40s approached him. And honestly? The exchange that went down next is so inspiring.

The stranger struck up a conversation with the pair, and then asked them after a few minutes if they were gay. After the two men indicated that yes, they were gay — but not a couple — the stranger shared that he believed his 13-year-old son might be part of the LGBTQ community. The father, from rural Arkansas, proceeded to ask how to "navigate that."

"He lit up when talking about his son, and I nearly started crying at how much he clearly loved him," Remmington shared in a now-viral series of tweets — which has over 12,000 re-tweets and 56,000 favorites, according to Insider. "The guy wanted to know how to make his son feel most comfortable about himself whilst not being too overt and glaringly obvious in forcing a conversation about his sexuality" he wrote.

Both Remington and Alessi shared some of their personal experiences with the father, advising him to normalize conversations around gay kisses on TV and call out "family conversations that might shame potential queerness," among other things.

They also mentioned avoiding "policing" his son's clothing or behavior for fear of how others might react.

Making his acceptance of LGBTQ people apparent — without obviously trying to pressure his son into coming out before he's ready — was yet another talking point. Remmington went on to recount a particularly powerful exchange he had with his own father. "For instance — when I was about 12, my v obviously straight brother and I were watching a soap with my dad and there was a gay kiss on screen," he wrote. "I vividly remember my dad saying if either of us ever thought we were gay that we would still be just as loved by our mum and dad."

He added, "Knowing that nothing would change stuck with me hugely and I remember that convo as if it was yesterday — it was *clearly* said for my benefit but was comfortable enough that it wasn’t a direct exchange and I appreciate my dad so much for this."

"He’s clearly doing all the right things and is making his son feel as comfortable as he can," Remmington concluded. "Take notes people this is how it’s done!! Particularly given that the boy is growing up far out of a metropolitan city this kind of unconditional love and support is invaluable," he wrote.

For the record, Mariah Carey herself even responded to the exchange via Twitter. "Thank you for warming my heart with such a beautiful story," the singer wrote. "I'm so proud of all of you and wish I could have been there in person to show my support!" Pretty freaking awesome, right?

Twitter reactions were pretty amazing, too, according to Pink News. “Literally you’ve just made a huge difference to a family, prime example of fate and everything happening for a reason right there,” one Twitter user commented.

“I know so many lives that would have been saved or made easier if only their parents had this conversation and subsequent knowledge earlier. My heart is so full knowing that dad wants to be parent his kid needs,” another person wrote.

Yet another person chimed in with, "The mental image of this man not knowing how to support his potentially gay son immediately going to the Mariah Carey slots machine to try and find some gays to talk to because he doesn’t know any is the funniest and most wholesome thing ever ksjdksjdks I would die for him."

I don't even know where to begin with this one, guys. From the fact that this dad sought out help from two guys wearing pink at a Mariah Carey slot machine, to Remmington and Alessi's actual advice, to the outpouring of love for this viral series of tweets in general... the whole thing is just too perfect. If only all parents could be so loving and accepting of their children as this father clearly is — regardless of their sexuality, gender identification, etc. It's stories like this one that give me so much hope for future. And I'm sure Remmington's powerful words will continue to help families long after the viral-ness of it all wears off.