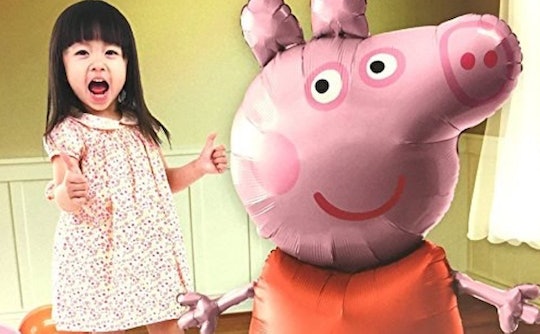 This 4-Foot-Tall Peppa Pig Is The Bingliest, Bongliest Balloon Ever

If your kiddo loves Peppa Pig as much as mine, their next birthday party just planned itself. This incredible giant Peppa Pig balloon is the ultimate party decoration, and it can be yours for just $16.

The Peppa balloon is a whopping four feet (or 48 inches) tall, so chances are it's actually bigger than your kid — the average 6-year-old measures in just a bit shorter at about 45 inches tall, according to Baby Center. You don't have to worry about it floating away, because there are weights in the feet that keep it grounded. It's basically another party guest, all things considered. Reviewers who purchased it on Amazon said it lasts quite a while — weeks and even months in some cases. It won't be fully inflated by then of course, but it'll still be filled up enough to stand tall long after your party ends. Not bad for $16.

While 48 inches tall might be just about child-sized, it's debatable whether it's true-to-Peppa Pig size. The internet was ablaze recently with reports that Peppa is actually 7 feet tall, which launched a slew of hilarious Tweets and memes. It makes a four-foot-tall balloon seem way more reasonable by comparison, but alas — it looks like it was probably just a viral hoax.

You'll need to inflate your Peppa balloon with helium to get it to stand up like it does in the picture, and costs for that can vary. There's a worldwide helium shortage going on right now, according to the New York Times, and CNN noted that it actually contributed to Party City's decision to close 45 stores this year. If your local store is among those closures, you can always snag your own helium tank — a small one costs $35 on Party City's website. It should give you enough helium to inflate Peppa and still have some left over for other balloons.

Peppa Pig is a relatively new discovery in my house (which means my daughter hasn't been watching it long enough to start speaking in a British accent), but it's actually been on the air for about 15 years, according to the Washington Post. That's some pretty impressive staying power for a kids' cartoon. That longevity means there's a huge amount of Peppa merchandise for sale. If you're throwing a Peppa-themed birthday party with the help of this massive inflatable, your kiddo might love this awesome Peppa Pig playhouse as their birthday gift, or this super fun firehouse.

Other character balloons are available, too, if your little one hasn't jumped on the Peppa Pig band wagon: There's a Mickey Mouse balloon that stands even taller than Peppa at 52 inches. Minnie Mouse, meanwhile, towers over them both at 54 inches — or at least this balloon version does. I went to a birthday party last year featuring these Mickey and Minnie balloons, and the kids absolutely loved them. The balloons also withstood the inevitable tacklings and stompings from overexcited toddlers, making them a fairly worthwhile investment.