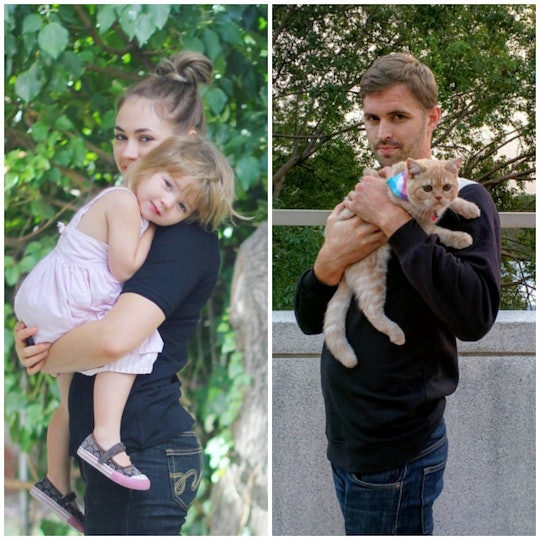 This Guy Used His Cat To Recreate His Sister's Family Photos, & It's As Glorious As It Sounds — PHOTOS

Do you have any of those oh-so-special friends who are suddenly so "adult" that they've decided for the both of you that it is no longer necessary to exchange presents for birthdays or any other holidays? Yes, me too, and yes, I also hate them. For Gordy Yates, it's a little different. As a decidedly not-so-adult adult, and someone who clearly doesn't know how to pick a birthday present, he's taken to expecting gifts instead of giving them. And for the shared birthday with his sister Meredith, there had never been an exception. This year, though, for her 28th birthday, he shook things up and kind of made up for the lack of all of the gifts for her last 27 birthdays.

Taking stock of her very active Instagram feed, Yates chose his favorite 28 photos and used them as inspiration for recreations of each one. But the best part was when he brought his cat into the mix. For each of his chosen photos where his sister was posing with one of her two children, Yates recreated those photos with his cat, an obedient little sucker, who some seasoned cat ladies and men might say rivals the cuteness of Yates' sister's kids.

While Yates has been traveling, partying, and enjoying the last leg of his 20s, his sister has gone and done the opposite of that, settling down with a husband and kids. Both of these worlds are fulfilling in their own way, and as someone in her late 20s who is the only friend of her group to have a kid, I have witnessed plenty of these partying friends who are, as Britney once said, not girls but but yet women (or something like that). So I can imagine the excitement Yates' sister must have felt to see this truly heartfelt and totally personal gift that doesn't come off as too mushy or sentimental, but still took a lot more effort than a 99-cent greeting card.

Let's take a look at Gordy Yates' photo recreations, and oh yeah, that cool-ass cat too.