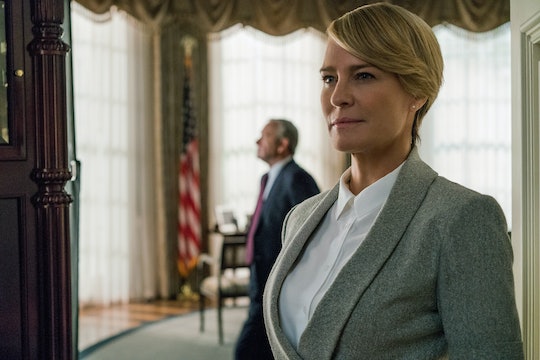 You Need This 'House Of Cards' Season 4 Recap

House of Cards Season 5 returns a little late this year following a truly wild campaign season. Frank and Claire Underwood somehow pull off a husband-and-wife ticket in the final hours at the Democratic National Convention, a slick millennial Republican named Will Conway enters the fray as Frank's opponent, an ISIS-esque terror threat looms over the United States, Claire has yet another lover who's more into her than she's into him, and there's still one lone journalist trying to avenge Zoe Barnes. If you're a little foggy on any of those plot points, this House of Cards Season 4 recap should help to refresh your memory.

It was a season jam-packed with twists — even though it was a little light on murder, by Underwood standards — and fantastic turns by memorable character actors. Claire's mom, whom we watched slowly die of cancer throughout the season until Claire agreed to assist her suicide, was played by Ellen Burstyn. And Will Conway is played by The Killing favorite Joel Kinnaman. Boardwalk Empire (and now The Night Of) alum Paul Sparks also returned to the role of sham novelist Tom Yates for Season 4. Remy, Jackie, Doug, and Seth all returned in Season 4 too, although with most of their power significantly diminished. Here's the nitty gritty of what went down last season.

After rising to the highest office in the land when President Walker stepped down, Frank Underwood launched a reelection campaign almost immediately after becoming president. His marriage was under extreme stress and, at the top of the season, Claire began to plot her own run at a Congressional seat in her home state of Texas, under the guise of laying groundwork there for Frank ahead of the primary.

In an effort to reunite with Claire, he appeared to mess with her run, only to promise her he'll back off if she returned to his side on the campaign trail and made their marriage seem happy.

Claire's mom got her rich Texas friends to donate to Heather Dunbar's campaign in an effort to tank Frank's run so Claire could focus on her career. But Claire had her own napalm: a photo of Frank's dad shaking hands with a KKK member. She had it blown up and plastered to a billboard, drowning Frank in controversy. The backlash was massive, and Frank's only out was putting Claire, his vastly more popular wife, on the ticket with him.

Frank won the primary and went up against Conway, the millennial, Republican governor of New York, whose social media-savvy family is loosely fashioned after Justin Trudeau's. Conway had a shady partnership with a search engine called Pollyhop to mine user data for voter information. Meanwhile, Frank just used the good old-fashioned NSA at his disposal to do the same.

Frank decided to let the Democratic party choose his running mate at the Democratic National Convention, even though he endorsed Cathy Durant as his choice. The electorate not-so-inexplicably chose Claire, and Durant conceded following thinly veiled threats from Frank in which he literally-but-just-kidding confessed to the murders of Zoe and Pete Russo. Ladies and gentlemen: the Underwood/Underwood ticket.

Lucas, Zoe Barnes' ex-boyfriend, struck a deal to be put in witness protection and got out of jail. But then he blew his new-found freedom to become an undercover journalist and exact revenge on Frank. After trying and failing to undermine Frank through other people in power, he eventually gave up, attended a campaign rally with a gun, and shot the president. Meechum took a bullet for him and died, and Lucas, too, went down in the spray of bullets. Frank suffered a gunshot wound, but survived.

Although Frank pulled through, the president needed a liver transplant to survive his injuries. But he's inexplicably number two on the transplant list. Enter Doug Stamper, who threatened doctors until they broke laws to bump him to the top. In a crisis of conscience, the doctor showed Doug the man who died because Frank stole his liver. Doug, of course, took this opportunity to become inappropriately attached to the man's widow and began seducing her? Ugh, Doug, you are truly the worst.

Tom Yates, the writer who was working on a biography about the Underwoods, came back into their lives with a fictionalized account of the power couple in a novel manuscript. He gave an excerpt to both the Underwoods and the Conways, and the Underwoods agreed to let him back inside their inner circle, with an offer to cultivate a better ending for his book. It was also their way of keeping an eye on him, but he now gets to write speeches for the president! Tom and Claire have a fling, but he's more invested than she is. Eventually, Frank gave his blessing to let it continue, because Tom can give Claire things he can't.

Tom Hammerschmidt is keeping the investigative journalism thread from House of Cards' Season 1 DNA alive by continuing the investigation into Zoe and Pete's deaths. He made all the right connections to the Underwoods with the help of Janine and he got Remy and Jackie to agree to go on the record with everything they know. He wrote an exposé for The Herald and ran it in the middle of...

Terror group ICO took a family of domestic hostages and threatened to kill them unless the White House listened to their demands. But when Frank entered the Sit Room to deal with it, the captors would only negotiate with Will Conway. Obviously, Frank felt a type of way about this (because this is about Frank's ego and not a terrorist situation). He regained control by flooring the gas on full-blown war. He ruthlessly allowed the terrorists to kill a hostage and livestream it on the internet with Claire by his side, unblinkingly. She broke the fourth wall for the first time in the final moments of the finale. Claire is here to win.

So, Season 5 is poised to center Claire in a never-before-seen way and I am, by and large, here for it. We're also poised to see the fallout from Frank declaring war and how it affects his reelection, as well as what will become of Hammerschmidt's tell-all.

House of Cards returns to Netflix with Season 5 on May 30.