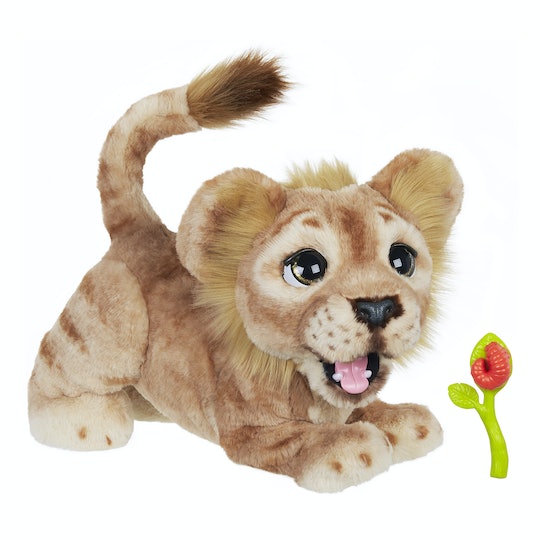 My husband and I took our son to our city's zoo for his first birthday, and of course we had to ride the carousel while there. Since it was the zoo, the carousel's song was "Hakuna Matata" from The Lion King. And let me tell you, every single kid, and every single adult on that carousel was singing along — including my husband and me. So you can imagine our delight when we heard there's a new interactive Lion King toy, the "Mighty Roar Simba," coming out just in time for the live action Lion King movie (which will be released on July 19). Did anyone else cry during the trailer and get goosebumps? Just me?

I believe most of the parents on the zoo carousel that day were around the same age as me and my husband, which means they were about 10 years old when the movie came out. Prime Disney-movie-viewing age, y'all. So of course everyone in our demo is probably super stoked about the new live action movie, and, consequently, this amazing interactive stuffed animal Simba, "powered by furReal technology." Available for pre-sale at Walmart for $100, Mighty Roar Simba will eventually be available at most major toy retailers, according to a press release.

Y'all, I am too excited because early on, one of the things my husband and I found out about one another that made us realize we were "meant to be" was that we both had the same stuffed toy Simbas as kids. Well, I guess deciding you and your S.O. are "meant to be" over toy Simbas is a bit dramatic, but we did think it was pretty awesome and "adorkably" cute. But this furReal Simba is way more technologically advanced than our beloved stuffed Simbas (sorry, childhood Simbas).

As the press release explains, the louder you roar at this Simba, the louder he roars back. He roars back! He also features more than 100 other sounds, motion combinations, and JD McCrary's voice ("Young Simba") speaking select phrases from the movie. Simba's head, mouth, eyes, legs, and tail all move, and you can even give him a "grub on a stick" for a snack. Timon and Pumbaa would be so proud, don't you think?

If you preorder now, the Mighty Roar Simba will be in your hands on June 4. Be sure to grab him during the pre-sale and get your nostalgia on — because in this case, you definitely don't need to "put your behind in your past." You get to relive an awesome part of our past, not put it behind us.

I mean... grab one of these Simbas for your kids, not for yourself for nostalgic reasons. Right, right, of course. The kids. The Mighty Roar Simba is for ages four and up. (Which means adults, too. Yay!) And make sure to go see the movie on July 19, starring JD McCrary, James Earl Jones, BEYONCE', Donald Glover, Seth Rogan, Billy Eichner, John Kani, and Chiwetel Ejiofor. You know what they say... it is time.