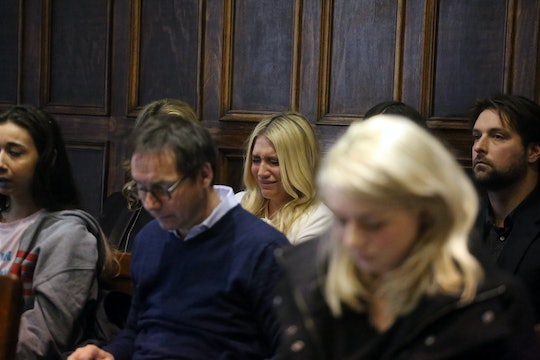 This Is The Message Kesha's Court Ruling Sent To Me, A Sexual Assault Survivor

Last Friday, when Manhattan Supreme Court Justice Shirley Kornreich ruled pop artist Kesha would have to continue to work with Dr. Luke — a music producer and owner of Kemosabe Records who has been accused of drugging and raping Kesha on multiple occasions and over several years — a very dangerous, very heartbreaking message was sent. (For his part, Dr. Luke denies he assaulted and drugged Kesha, releasing the following statement on Twitter: "I didn’t rape Kesha and I have never had sex with her. Kesha and I were friends for many years and she was like my little sister." To read the rest of his tweets denying Kesha's claims, read here.) Despite the fact that Kornreich may have been speaking to Kesha directly, a ruling on matters that only affect and concern Kesha and the man she accused of sexually assaulting her over a 10-year period, Kornreich was speaking to sexual assault victims everywhere. And in doing so, she was speaking directly to me.

I heard the news and was immediately reminded of just how much my body is worth, how much time should be devoted to protecting it, how much effort should go into prosecuting those who harm it, how believable — or should I say unbelievable? — I am as a woman. And, thanks to a judge who put profit ahead of a woman's right to her own body, I was reminded why.

No matter how loudly I screamed in a room full of individuals who claimed they wanted to help me, no one heard me.

When Justice Shirley Kornreich said that Kesha was "asking the court to decimate a contract that was heavily negotiated and typical for the industry," I was reminded of how little effort is put into fighting for women. Negotiations trump real questions about safety. Contracts supersede what, according to Kesha, is a very real pain. Some points of view are more bankable than others. It made me feel that my body parts are for labeling, categorizing, filing, and ignoring.

During a rape kit that was administered after I came forward and reported my assault, my wrists, breasts, legs, and thighs were photographed as evidence. My flesh became formal documentation, papers and sheets and documents that should have be studied and analyzed but were instead left in boxes, next to the case that had come before mine and, undoubtedly, the case that would come after. Now, photographs of my wrists and breasts and legs and thighs are likely at the back of a filing cabinet somewhere, collecting dust and indifference, forgotten because of a backlog that will take years to deteriorate. In an interview with The Daily Beast, Scott Berkowitz, founder and president of the Rape, Abuse, & Incest National Network (RAINN), attributed the backlog in part to the fact that the FBI's DNA Index System didn't exist until the mid-1990s and the rising costs of the kits themselves (each cost police departments anywhere from $500 and $1,500 per kit).

I heard the ruling and felt powerless all over again, now that our government has decided it's OK to force a woman to work with someone she says she doesn't feel safe being around.

When Dr. Luke's attorneys, headed by Christine Lepera, claimed that, "Our interest [are] in her success. Our interest [are] in Dr. Luke’s success," What I felt was that there are a group of high-powered, privileged men (and, as it would appear, women) who will always think they have the power to decide what is best for me. When lawyers claim to know what's best for a woman, in the process of arguing against said woman's wishes and pleas and demands, they're reinforcing the idea that a man with privilege and power (and sometimes, even without those things) will always know what is best for a woman and her body and anything in between. I heard the ruling and felt powerless all over again, now that our government has decided it's OK to force a woman to work with someone she says she doesn't feel safe being around.

And to hear both of the statements come from women reminded me that allegiance and support is not gender-specific. In Kornreich's ruling and Lepera's statement, I heard the judgmental voices of women who heard what had happened to me, but were more hurtful than helpful. The whispers of doubt and disbelief bombarded an already aching mind, as I remembered the pain of being told that I could be misremembering or confused or anything other than sure of the very real violation I had been subjected to. I remembered that the roots of sexism and misogyny are deep and infectious, and can exist within a woman just as easily as they can a man.

When the judge told Kesha, "There has been no showing of irreparable harm," I was reminded what it's like to be questioned — to be on the defensive on in a situation where your only defense is to tell your story, because that's all you have. To tell that story repeatedly, endlessly, ad nauseam. In my own experience, my attacker was also someone I worked with, someone many considered kind, someone who came from a good family and who claimed would've been more inclined to "make a mistake" than sexually assault anyone. It was his word against mine, and no matter how loudly I screamed in a room full of individuals who claimed they wanted to help me, no one heard me.

When the judge said, "My instinct is to do the commercially reasonable thing," I was reminded of my perceived worth. I was pained with the acute impression that my body is not as important as a profit, a profit usually enjoyed by someone else. Commercial excellence and financial benefits and high-profit margins are worth more than my safety or security; worth more than justice and worth more than any shred of ownership I could have over my body.

I remembered the feel of the wood on the chair on the detective's office; the one I sat in when he told me that despite my best efforts, there was nothing he could do.

And when the judge said that Kesha was "given opportunity to record" any wrongdoing, I remember why I wished I had never reported my own sexual assault. I was put through a painful exam and my body parts were categorized and labeled and I was called a liar because I had been drinking, and in the end, it was all for nothing. There wasn't enough evidence to prove I was assaulted, and in most "he said/she said" cases, according to the detective handling my own, there's nothing a police department or higher authority can do.

I heard the now-infamous ruling on February 19, and was reminded why so many women do not come forward and report their rapes. I remembered why rape and sexual assault is grossly under-reported, that of the roughly 300,000 victims of sexual assault every year, 68 percent of them are not reported to police or authorities, according to the RAINN's data. I remembered that there's an untold number of sexual assault victims suffering in silence, right now, right this very minute, as they devour the words of a callous judge and a narrow-minded lawyer. I was reminded that their society, much like my own, doesn't value their worth, their welfare, or their word.

I remembered the feel of the wood on the chair on the detective's office; the one I sat in when he told me that despite my best efforts, there was nothing he could do. The wood was cold and indifferent, not unlike our culture when victims come forward and share their stories. The chair was the only thing holding me up, as I tried to tell the world that I was sexually assaulted, and the world whispered back, "it doesn't matter." I can only imagine how the wood on the bench Kesha sat on while the judge told her there was nothing she could do felt to her. Unfortunately, I'm afraid I already know.