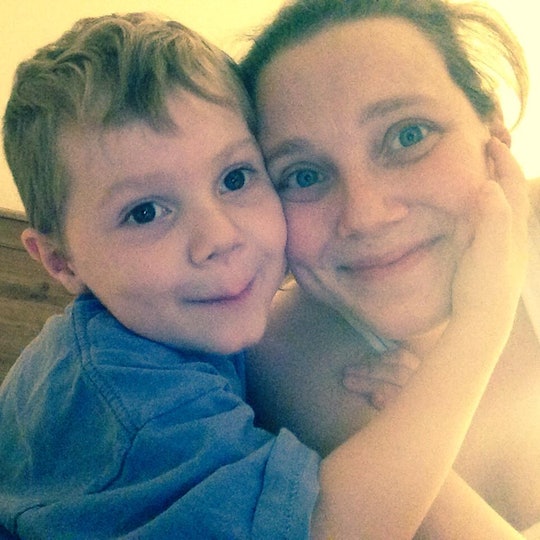 One of the hardest things about being a mother with anxiety disorders is seeing my kids experience their own anxiety. Anxieties are a normal, healthy part of life. Those feelings keep us safe and prepared. Of course my kids are going to feel anxious when they're starting at a new school or visiting the doctor. When my kids are feeling anxious I always make sure to tell them it's OK to be anxious, and that the discomfort they feel is going to pass. I choose to tell them this because it's the same thing I tell myself in the midst of my own panic or spiraling thoughts.

More Like This
Vaccinated People Can Ditch Masks. Where Does That Leave Kids?
15 Face Masks For Kids That Are Cute, Comfortable, & Get The Job Done
If A Tick's Head Gets Stuck When You're Pulling It Out, Here's What To Do
Is The Tooth Fairy Real?

I look back on my own childhood and I see that I was often anxious. My stomach often hurt. When I was nervous, I couldn't eat and often I'd have to run to the bathroom. But personality-wise, I was happy-go-lucky and pretty laid back. No one would look at me and think I was anxious. But when I got older and began having panic attacks with regularity, and when I started to become fearful about everyday things, it was the first time I really acknowledged my anxiety. In fact, for a long time, I didn't know anxiety was to blame for the very physical symptoms I was experiencing. Now, as a parent, there's one thing I want my kids to know about my anxiety and about their own. I want them to know that no matter what they're feeling, it's OK to feel that way.

For me, personally, fear was behind it all. At first I'd panic in places where I didn't feel safe. But then I started to panic even when I'd worry about having a panic attack. Panic attacks are physically and emotionally excruciating. They are exhausting and terrifying. Of course I feared them. But it quickly spirals out of control when feeling the fear leads to attack.

Nothing is more insulting to someone who has experienced irrational fears that they know are irrational than when another person tries to talk them out of their fears.

Having panic disorder and agoraphobia didn't look or feel like the anxiety I experienced earlier in life. Those anxieties often had a discernible reason and purpose. My hands would shake before a piano recital. Or I'd have an upset stomach before my horseback-riding lessons because even as much as I loved horses and riding, it always made me anxious. Those nerves were unpleasant, but the purpose was obvious. I needed to be safe around horses. I wanted to play well in recitals, and my heightened senses while feeling anxious helped me, even if the shaky hands did not. But always, once I was playing or once I was up on that horse, the fear passed and I could just enjoy the things I loved.

I worried that maybe my son was wired like me, that he would be facing a lifetime of unwanted thoughts and fears.

My son is a bit like me. Sometimes when he's nervous, he finds it hard to eat. When he started school, he had a week where I could tell his anxiety was ramping up during the drive over. He'd realize we were getting close, and in a wavering voice, he'd say, "Mom, do we have to go? I really don't want to go." I didn't brush off his worries. Because nothing is more insulting to someone who has experienced irrational fears that they know are irrational than when another person tries to talk them out of their fears. Instead, when I saw anxiety in my son, I told him that it sounded like he was anxious or nervous. I told him that the feelings would pass. I told him that a lot of times we're nervous about things before we face them, and once we do face them, the anxiety disappears. I told him that if he felt uncomfortable in his belly, he could take deep breaths and try to fill it up with good air.

So if he wanted to talk about his feelings, that's what we would do. If he wanted to change the subject, we would. I could generally make him laugh by telling him silly stories, or sometimes I would suggest some mindfulness exercises. I'd tell him that if he looked really hard out the window, he'd notice things he hadn't before, even if we drove that way to school every day.

Even a lifelong struggle with anxiety doesn't mean endless suffering.

I let him know that I knew exactly how he felt. And I knew it was uncomfortable. I let him know that sometimes I would feel so anxious and I'd feel sick. I haven't really brought up the fact that, for me, it's a lifelong struggle, that I will likely be on antidepressants for the long haul because without them, my brain drowns in negative thoughts and I have no sense of well-being. But I've shared with my children that there are some things I just don't like doing, even though I know they won't hurt me. And I tell them that I've learned a lot of things that help me when I'm feeling uncomfortable. But mostly, I tell them that even though it might feel like the anxiety will go on forever, it will end. It'll end when they think of other things or get busy. And someday, I'll likely tell them that if it becomes unmanageable, there are people that can help them with that. That there are medications and therapies and techniques. Even a lifelong struggle with anxiety doesn't mean endless suffering.

The days I have now where I feel uncomfortably anxious or panicky are few and far between. I don't consider myself "cured" because of my need for medication and the fact that I still hate things that I was afraid of. I hate car trips and waiting rooms. I hate small spaces. I hate feeling sick. I'll probably never be as laid-back as I wish I could be. But it's OK. My anxieties keep me safe. They've made me more sensitive to how anxieties and emotions might be affecting others. They've made me compassionate. And they've made me a mom who knows how to help her children cope with fear.