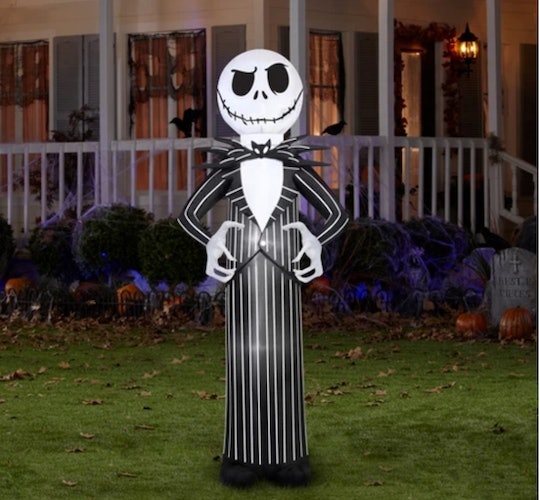 The age old debate about whether The Nightmare Before Christmas is a Halloween movie or a Christmas movie has been officially settled by Target. Yes, Halloween has won. As if you needed one more reason to make a Target run, Halloween season is upon us and you're absolutely going to want — no, need — this Jack Skellington inflatable Halloween decoration for your yard this year.

You can now pre-order the massive, nearly 7-foot-tall inflatable Jack Skellington character on Target's website to set up outside of your home for Halloween after its release date on Aug. 22. Your neighbors will either squeal with delight or run in fright depending on how familiar they are with the eerie yet lovable character from the Disney classic, The Nightmare Before Christmas.

If you're forever rooting for Halloweentown's beloved Pumpkin King, you're going to absolutely love having his daunting self light up your yard during this Halloween season. The inflatable Halloween decoration uses LED lighting to illuminate Jack Skellington's familiar face and frame, complete with his signature black and white pinstriped suit and bat-shaped collar. His black-as-coal eyes will cast a mischievous stare out over the trick-or-treaters who dare cross the threshold of your spooky sidewalk, while his creepy claw hands rest authoritatively on his hips.

This self-inflating yard decoration will run you nearly $60, but is well-worth every penny, as it comes with everything needed to set it up this Halloween season. It also deflates down for easy storage if don't think your neighbors would be super into you leaving a massive light-up inflatable of Jack Skellington up year-round. Personally, I would at least leave it through Christmas to encourage more debate about whether or not The Nightmare Before Christmas is a Christmas movie or a Halloween movie, but I would probably add a Santa hat and maybe a few skeletal reindeer for good measure.

While Target doesn't yet have Sally or Oogie Boogie available as inflatable Halloween yard decorations, they have no shortage of Halloween-themed decorations for your entire home available within Target's Hyde & EEK! boutique. You can find adorable and affordable Halloween items that run the gamut from spooky serving trays for your monster bash to friendly-faced ghost wreaths for your door. And if you just can't get enough of The Nightmare Before Christmas, Target also carries a nano decor set of Jack Skellington's house that is ideal for decorating a bookshelf or mantle from October to December, or year-round for die-hard fans of the ghoulish classic.

As the time for jack-o-lanterns and spooky stories draws near, stocking up on new decorations to deck your haunted halls will help you ease through the transition from end of summer blues to your Halloween happy place. What better way is there to kick off the Halloween season than with new yard decor to scare all of the neighbor kids away and let you keep all of that delicious candy for yourself? And yet, as creepy as Jack Skellington may appear in his looming, almost 7-foot-tall inflated state, his sideways stitched-on grin sure does fill my heart with nostalgia for the beloved Disney tale.