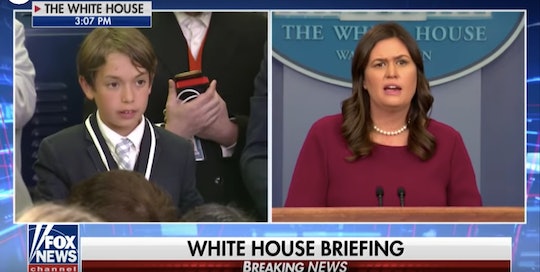 This Young Boy's Question About Guns In School Made Sarah Sanders Tear Up, & Twitter Is In Awe

Sarah Huckabee Sanders gets picked on a lot as President Donald Trump's White House press secretary, but there's no argument that her job is a tough one. And the state of the socio-political climate might actually be getting to her too these days. On Wednesday, a 13-year-old kid's question about school shootings made Sarah Huckabee Sanders tear up as she gave her response, in a very rare show of emotion. Twitter, which is used to watching her on the defense as she takes questions from the podium, was understandably in awe of this new side of our country's spokesperson.

Benje Choucroun, a 13-year-old with TIME for Kids was in the briefing room on Wednesday and told her that he was scared to be shot at school, as The Hill reported. The budding journalist then asked her what the administration is doing, or plans to do, to make schools safer for children. It was a very timely, telling question.

Sanders responded, according to video of the briefing, "I think that as a kid and certainly as a parent there is nothing that could be more terrifying for a kid to go to school and not feel safe." On social media, people were debating whether those were tears she was fighting back or if she just has allergies.

Her voice trembled a little bit as she continued, "So I’m sorry that you feel that way.” She then added that the president "takes it very seriously" and had a school safety commission meeting this week to "discuss the best ways forward and how we can do every single thing within our power to protect kids in our schools."

According to The New York Times, that commission is led by Department of Education Secretary Betsy DeVos and it hasn't really done all that much yet. After the Parkland, Florida school shooting Trump seemed to be getting involved and suggested arming teachers as a solution to school gun violence and looking into getting stricter background checks for people who buy guns. He also suggested raising the minimum age to buy a gun but later tweeted that there was no political support for that, as reported by The Denver Post.

All of the inaction on taking meaningful steps towards preventing senseless gun violence and Sanders response to the 13-year-old had Twitter legitimately shook.

They Saw Another Side Of Her, Sort Of

Choucroun told People after the briefing that he was pretty nervous to ask a question. He said, "because I knew that these press conferences were a big deal and Sarah Huckabee Sanders is a big deal.” He added that he was "surprised" that the press secretary got choked up but that he was glad he drew attention to the issues. According to People, Choucroun added:

I’m glad I did it because school shootings, as we saw in Santa Fe, are something that needs to be stopped. And I’m happy that I raised awareness to the issue.

Since the Parkland, Florida shooting, there have been two other school shootings, in Texas and in Indiana, along with the March for Our Lives, led by student activists for gun safety, but not a whole lot of actual work to change some of the rules surrounding gun ownership.

On social media, some were quick to note that getting emotional is akin to sending thoughts and prayers after shootings instead of taking real action, such as redefining how we define and disarm domestic abusers, pushing for universal background checks, or passing Red Flag Laws in states to give law enforcement some more preventative power.

Hopefully, kids like Choucroun, parents, and legislators will keep pushing for some change when it comes to gun violence prevention. Even if we all feel like crying about the scary and sad state of the gun policy debate, there's a lot more work to be done.