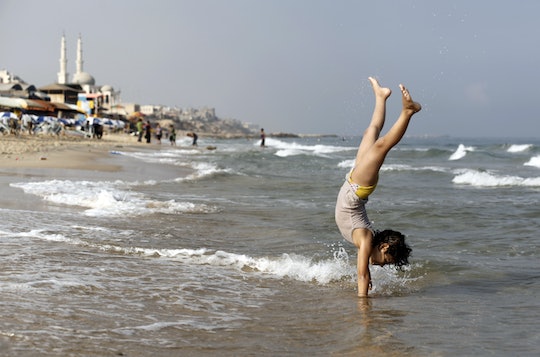 Research suggests that young girls, in particular, are increasingly experiencing negative effects of body shaming at young ages. The media, and the rise of social media, are factors that are partially to blame. That's why this magazine's swimsuit chart sends the wrong message to young girls about body image, and misses the opportunity to promote body positivity, instead.

Discovery Girls, a magazine meant to provide advice and inspiration for girls ages 8 and up, recently published an article with a bathing suit chart called, "What Swimsuit Best Suits You?" The chart diagrammed bathing suit designs that are (supposedly)best suited for young girls depending on their body types. The spread, showcasing a variety of bikinis and one pieces, some with cutouts, suggested that "coverage is key" for young girls who are "curvy up top," with other design recommendations for girls who are "rounder in the middle," or "straight up & down." With pointers and tips (if you can call them that), suggesting young girls pick bathing suits to either "add curves" or wear designs that hide a "rounder in the middle" body type, many are asking why a magazine meant to uplift girls would promote harmful messages about body image. Especially since those messages often leads to body shaming, a real, societal issue that grown women often struggle to combat – yet alone a 8- or 9-year-old girl. Discovery Girls did not immediately respond to Romper's request for comment.

Classifying a "body type" on a young girl at such a tender age, when she is going through rapid mental, emotional, and physical changes, is detrimental enough, but then telling her what bathing suit is suitable to wear based on her body — when the word "bathing suit," especially at that age, should only trigger fun thoughts like, summer, splashing, and swimming — adds layers of concern.

Catherine Lee, the publisher of Discovery Girls, wrote a statement on Facebook, addressing the many concerned parents who expressed their outrage over the article.

First, I want to thank all the parents and my amazing readers who brought this swimsuit article to my attention. As the founder of Discovery Girls magazine, and even more importantly, the mother of the first Discovery Girl in 2000, I am in total agreement with all of you regarding this article, so much so that I wanted to make this letter as public as possible. We want to make sure that our girls know that any article that makes you feel bad about your body is not a good article, and should be questioned.

Lee further explained that she was in disbelief of the article's message and that it is contrary to the publication's mission.

The article was supposed to be about finding cute, fun swimsuits that make girls feel confident, but instead it focused on girls’ body image and had a negative impact. Nobody knows better than Discovery Girls how impressionable our girls are at this age and we are ALWAYS mindful of this.

But some parents have commented that even the original intent of the article, a spread that makes "girls feel confident" in swimsuits, is problematic in itself.

"Subscriber here. I thought I was with you until this: 'The article was supposed to be about finding cute, fun swimsuits that make girls feel confident'-- what?! No. I don't want your magazine telling my 9-year-old that she needs to feel 'confident' in her swimsuit. She has no current thoughts about NOT feeling confident in her swimsuit..." one parent wrote.

Lee added that Discovery Girls works to address insecurities that girls have about their bodies and that the brand invested five years in a book called, Discovery Girls Guide to Growing Up, to combat that very issue.

Body insecurity and body shaming in young girls is in fact a serious issue. And messages in the media, and social media only makes things worse.

According a report by Common Sense Media, a 2013 Tiggemann & Slater study found that teen girls using Facebook were more likely to internalize a concern over their bodies and a need to be thin. The report also detailed a national 2010 survey of girls by the Girl Scouts Research Institute, which found that nearly half of the girls surveyed wished they were as skinny as the women they saw in fashion magazines.

Body images of women in the media that promote a narrow idea of what a good body type is are often detrimental, stereotypical, and often times, these images promote bullying in schools and on the Internet. Last November, a college professor named Kara White wrote a viral Facebook post on how her friend's 8-year-old daughter has already been a victim of body shaming — by her peers and adults — for being fat. Recently, Orange Is The New Black actress, Selenis Levya, opened up about her tween-aged daughter's body insecurity over being "curvy."

Body positivity is about self-love and the appreciation for all body types. Young girls should be informed and encouraged about the body positivity movement, especially in a society where access to negative perceptions of body images,(disproportionately of women) are so accessible. And, as many parents have poignantly pointed out on Facebook, a young girl's "body type," and how it relates to her clothing, should not even be a topic of discussion.