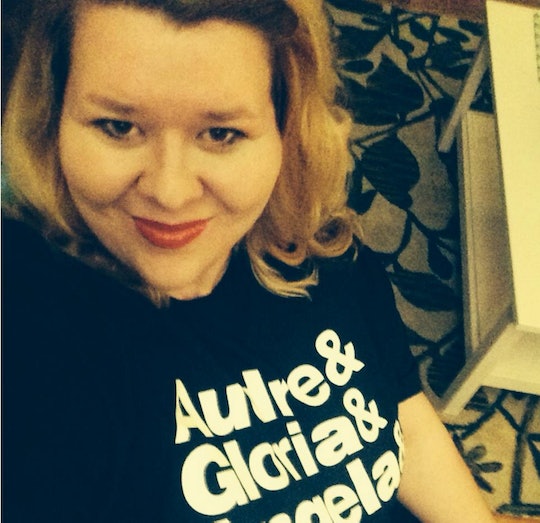 Most people, at one point or another, experiences body shaming. This is especially true if you are a woman; If you're a plus-size woman, or a woman of color, or both, it's even more true. It’s like the moment you’re born, people — those whom you know personally and those you don't — take it upon themselves to let you know what they think is wrong with you: Too skinny, too fat, nose is too big, hips are too wide or not wide enough, hair is too frizzy or too limp, breasts are too small or too large, and let’s not forget the obsession with thigh gaps and getting our “pre-baby bodies” back.

I know I struggled throughout adolescence as others (from family members and so-called friends to my ballet instructor) said hateful things regarding my protruding belly, the texture of my hair, my crooked teeth — you name it. I didn’t know how to respond in those days. Body shame wasn’t a frequently used term then, and it took years for me to learn the value of self-love, something no one should have to go through.

Recently, Kara Waite, a college professor in Boston, was approached by a friend whose young daughter was being body shamed at school. Having experienced body shame in her own life, Waite was deeply affected by this 8-year-old girl's experience.

She gave her friend some incredibly sound advice and afterwards, decided to write a Facebook post about the incident, in hopes that others might know how to respond to similar incidents in their own lives.

Today I had a long talk with a friend about her little girl. The child is overweight and, not only are children at school teasing her, but her doctor and teacher are making cruel comments about the girl in front of her. This makes me so sad that I can't even express it. I know that there are health risks that accompany being overweight. I understand that childhood obesity is a big problem. I get all of that.

But that doesn't change the strong possibility that, somewhere, there's a little girl being made to feel bad about her body, and that's bad. But what's worse is that, being female in this culture, that body isn't just her body, it's her self.

And what will any of this accomplish? I'll tell you what might happen because I know: years of yo-yo dieting, disordered eating, body dysmorphia, and, very likely, a metabolism fucked beyond all recognition such that her body holds onto every calorie. A constant cycle of restricting and permitting. An obsession with food, thighs, cellulite, rolls, curves, lard, blah blah blah. Insecurity. Turmoil. A waste of time, money, energy, and happiness.

What it won't accomplish: making her skinny, making her fit a standard that is pervasive, that is at once systematic and completely arbitrary.

Take her outside. Plant a garden. Play in the snow. Play tag. Get a slip and slide and swing set and a hoolah hoop. Buy her a purple bike with bright yellow streamers. Teach her to play an instrument and dance like a crazy person. Buy her art supplies and show her all of the bodies that artists have celebrated throughout history. Feed her good stuff, but have conversations with her while she eats it. Say things that aren't about food. Read great books. Teach her to sew or sing or make balloon animals. Go back outside. Tell her she is beautiful, but say it half as much as you say that she is kind and generous and hysterically funny and at the top of your list of favorite people. Talk about anything but bodies. Turn off the fucking TV. Jump in the pool and don't talk about how big your splash is or how your thighs look in your swimsuit.

Tell her that the people who criticize her body have problems with their own bodies, or, worse, with their hearts and minds. If she needs a bigger size, buy it, but shut the hell up about it.

In the post, Waite advises her friend to "[tell her daughter] that the people who criticize her body have problems with their own bodies, or, worse, with their hearts and minds.” She goes on to explain to her friend how to encourage her to be both happy and healthy, by doing things like playing tag, teaching her to sew, getting her a bike, and talking “about anything but bodies.”

Waite also makes the observation that when it comes to body shame, it’s doubly hard on women.

I don’t think I fully realized the cumulative affects of body shaming and food shaming until I was in college. I remember being out with a really thin girlfriend. We were eating ice cream and she started calling herself a fat pig and I thought, "but, wait, you’re skinny!” And then I got it, “oh, this kind of thing – self-consciousness, the fear of fatness, the picking at every part of one’s appearance—is something that’s happened to a lot of women.” I guess I always just thought that I was criticized because of the way my body looked, but then I saw that it’s kind of a rite of passage for women, which is terribly sad.

In her viral Facebook post (which up to now has been shared hundreds of times), she makes this related observation:

Being female in this culture, that body isn’t just her body, it’s her self.

Waite's post ends with these two golden pieces of advice, which could be used for anyone experiencing body shame:

Tell her [she] is beautiful, but say it half as much as you say that she is kind and generous and hysterically funny and at the top of your list of favorite people.

Accept her exactly as she is...and let her know it.

Waite is currently writing a memoir on loving her body after risking her health in the pursuit of impossible beauty standards. She leaves us with this one final note:

Realizing that you can be happy and healthy and loved without being “perfect” is an incredible, powerful thing.

More Like This
Katrina Scott On Being First Pregnant Model In Sports Illustrated’s Swimsuit Issue
From Captions To Gifts, These Are All The Kindergarten Graduation Ideas You Need
10 Ways ‘Workin' Moms’ Is Basically A Crash Course In Parenting
10 Of Céline Dion's Best Quotes on Motherhood