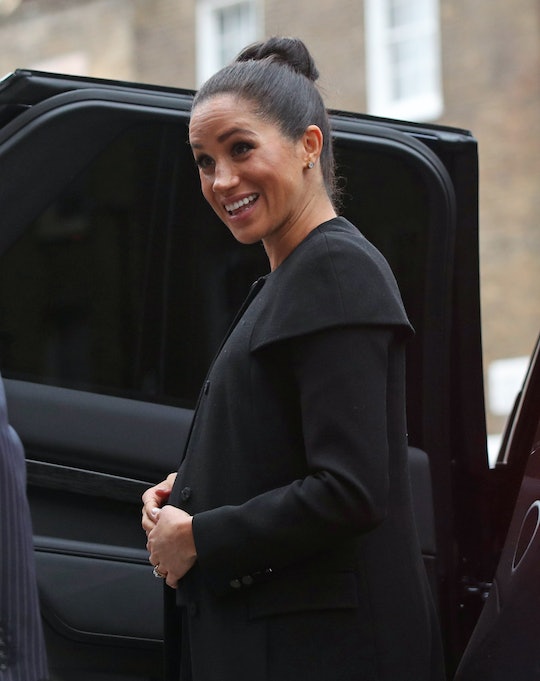 These days former Suits star Meghan Markle goes by the Duchess of Sussex, a title she earned upon marrying Prince Harry in May 2018. But once upon a time, Markle was just another theater kid starring in musicals. Want to see some evidence? Look no further than this throwback photo of Meghan Markle posing alongside her old pal, singer-actress Katharine McPhee. The pic — which already has 22,000 likes as of Thursday — is a sweet reminder of how far Markle has come.

Before Markle earned international recognition, she starred on Suits between 2011 and 2018. She also appeared in a bunch of movies, including Horrible Bosses and Get Him to the Greek, to name a few of the many titles on IMDb. But long before that, Markle was flexing her acting muscles in musicals.

McPhee, who was friends with Markle during their childhood, reminded fans of this fact when she shared a throwback photo of the two to Instagram on Thursday.

"Meghan and I did musicals together as kids," McPhee captioned a shot of the smiling pair. "She grew up to be the Duchess of Sussex and I grew up to star on the West End, so same life if you ask me. #TBT."

From the matching red lips to the bouquets in their hands, this photo is one big nostalgia bomb. I bet a lot of people who've starred in a school play or a variety show have similar photos stashed away somewhere.

Shortly after McPhee posted the snap, many followers took to the post's comments section to share their thoughts.

"This is the best!!!" one person commented.

"Wow Kat!" a commenter wrote. "A throwback for real."

The timing of this photo is a bit funny given that a musical about the Duchess of Sussex's life aired on Jan. 1 via BBC Radio Four. The 15-minute show — “The Sixth in Line to Be King and I" — was an “inspired celebration of Meghan Markle‘s life to date,” according to People.

I think it's safe to say Markle probably never thought her life would one day get the musical treatment, right?

Musicals aside, it's pretty wild to think about how far the Duchess of Sussex has come in her life. Not only is she expecting her first child within the next few months, but she's also busy with her many royal duties. From philanthropy and charity work to giving speeches about feminism, her life looks a lot different today then it did back then.

Of course, all of these changes doesn't mean Markle is necessarily a different person. Royal contributor Omid Scobie revealed to Us Weekly that the royal is just as grounded as ever, noting that she supposedly plans to raise her kids like everyday people. “Meghan will take her kids on a subway. They’ll have chores, and jobs one day,” Scobie explained. “They won’t be spoiled.”

And if Markle ever finds herself veering off course, she can revisit the throwback photo McPhee shared to remind herself of where she came from.