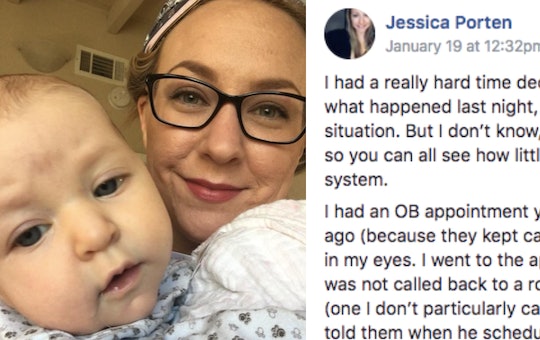 As a society, we're very slowly becoming more aware that we need to take better care of mothers postpartum. But fixing the gaps in the health care system is not going to be simple. To really get a grasp of just how broken our system is, you should read this mom's account of getting the cops called on her when she sought help for postpartum depression. It's infuriating and sad, and likely happens more often than most would think.

Jessica Porten shared her story in a now-viral Facebook post on Friday morning — garnering more than 35,000 reactions, more than 29,000 shares, and nearly 10,000 comments since — and with every sentence, you can see how the system fails to prioritize new moms. As she wrote in the post, she gave birth four months ago and had just gone to her first doctor's appointment "because they kept cancelling appointments."

After waiting for an hour, according to her post, a nurse practitioner brought her in and began the checkup. While getting her information, Porten, who had her infant daughter with her, told the nurse that she had "postpartum depression that is manifesting in fits of anger" and that she wanted to discuss medication options. Porten added, "I tell them I have a very strong support system at home, so although I would never hurt myself or my baby, I’m having violent thoughts and I need medication and therapy to get through this."

The nurse reportedly told her that she had to talk to the doctor and would be right back. When she did, the nurse then informed Porten that the police were on their way.

Porten told Romper that the nurse explained to her that the police were coming to escort her to the emergency room, but she was confused about why she would have to go there in the first place.

"I thought it was very odd that this was standard procedure, but went along with it because I was told by staff at my OB that the ER would help me," she tells Romper. But when she got there, she said she was told by a social worker that it's not policy for an emergency room doctor to prescribe antidepressants or medically treat PPD, since it's usually worked out with a primary care doctor first.

The police came and then escorted Porten to the emergency room, according to her post, where she was triaged and told to wait some more. Her husband and other child came to wait with her for what ended up turning into a 10-hour ordeal between the office visit and then the hospital, as she shared on Facebook. She gave a urine sample and eventually saw a social worker, who ultimately decided that Porten didn't need to be put on a psychiatric hold, gave her some pamphlets, and then discharged her.

Porten said she was never seen by a doctor at all during the entire day, not even before the nurse at the office reported her postpartum depression to the police. "I leave the ER at midnight, my spirit more broken than ever, no medication, no follow up appointment, never spoke to a doctor," she wrote.

As Porten shared in her post, she was in California, where any health practitioner is able to alert law enforcement if they suspect child abuse or that a patient is suicidal, according to the Family Violence Prevention Fund. But given that PPD is a mental illness, it would make sense that a doctor would need to actually make a diagnosis before making such a call. But the actual laws about who decides when to report a patient based on their mental health concerns varies state to state and in California, both the doctor's office and the emergency room didn't technically do anything wrong since they were acting in good faith out of concern for the patient.

It's not the best procedure and this story in particular highlights almost every single thing wrong with the current health care system, whether it's how we deal with mental illness in general or the fact that, as Porten wondered, if she was a woman of color, she might not have come forward at all about her PPD or could have been treated differently by both law enforcement and the social worker at the hospital.

About one in seven women experience PPD, according to the American Psychological Association. The APA encourages women to report any mood changes to their doctor after birth and seek therapy if needed, but if a health care professional's response is to call the police at the first mention of depression, rather than further medical examination, why would a woman feel safe talking to her doctor about how she's feeling?

Of course, doctors are mandated to report a patient if they feel she might hurt herself or they spot child abuse, according to California law. But that wasn't happening here, according to Porten's account. And, as Porten shared, a doctor never even looked her in the eye to diagnose her.

It's troubling to think that if Porten wasn't a white woman accompanied by her husband how she might have been treated. "I may be marginalized as a woman, but I am white and heterosexual and hold privileges in these places," Porten wrote on Facebook. "I am scared for our mothers of color and our LGBTQ mothers who seek out help in these situations."

Already, because of stigma, black women are less likely to talk about PPD, according to Psychology Today. A study done by NPR, the Robert Wood Johnson Foundation and the Harvard T.H. Chan School of Public Health found that 33 percent of black women reported being personally discriminated against by their doctor or health clinic and 21 percent avoided seeking health care because of fear they'd be discriminated against.

Porten told Romper, "While we were in the ER, I looked my husband in the eyes and said 'What if we were black? Or didn’t speak English?' And the thought literally scared us."

One of the other terrifying thoughts is that after a day-long ordeal in an emergency room, this new mom was sent home with no guidance at all and a bad taste in her mouth for a health care system that's supposed to support her. Porten tells Romper, "There HAS to be something in between 'You’re too mentally unstable to care for your children, we are admitting you to a psychiatric hospital for a minimum of 72 hours for monitoring,' And 'Here are some papers, good luck.'"

Untreated or undiagnosed PPD is really serious, according to the Centers for Disease Control and Prevention. Much like other kinds of clinical depression, a woman suffering with PPD is at risk of suicide or self harm. It also takes a toll on the entire family and can impede the care of the child, especially if it manifests itself as extreme worry and guilt about possibly hurting a child.

Yet, PPD is totally preventable and treatable. If, of course, women are encouraged to talk about it and teach medical professionals how to handle it. There are so many other ways to intervene that aren't as disruptive as immediately calling the cops on moms seeking guidance and help. Fortunately, Porten's looking into getting more help, as she told Romper:

The social worker in the ER gave me information on a ton of valuable resources that our community has. I will be taking advantage of them, but I have not gotten a new doctor yet. I am in contact with wonderful women here in California who are working to find me care that is covered by insurance.

Porten wrote in her post that she only shared her story to draw awareness to the problems women face when it comes to getting help, but that she wasn't going to complain to the hospital or doctor (and didn't name the medical facility where she sought treatment). Given the outpouring of support, she's also using #Action4Jessica. "We are encouraging people everywhere to reach out to mothers of color and LGBTQ parents with free services, instead of offering them to me," she told Romper, so something good might actually come from this.

Hopefully, Porten will find a new doctor who can actually help her. And, hopefully, her story makes a lasting impact until things get better for new moms seeking medical help, because this system really isn't working.