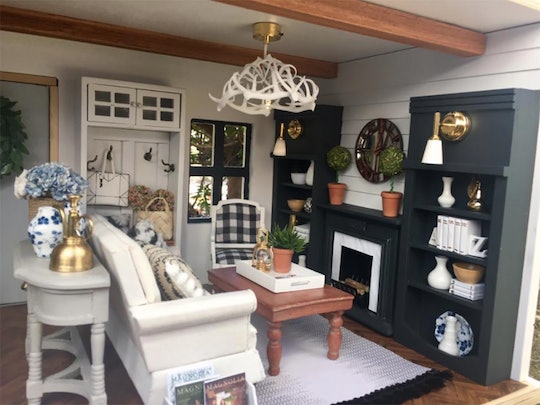 This Mom Made A ‘Fixer Upper’ Inspired Doll House, & It Will Seriously Blow Your Mind

It's no secret that HGTV mega-hit Fixer Upper has a very dedicated fan base. And when the show ends following its fifth season, it's a safe bet countless people will be devastated to see the series' beloved stars, Chip and Joanna Gaines, move on to other projects. But as sad as it is to realize that the show is on its way out, take solace in the fact that many fans intend to keep its memory alive, like this mom who made a Fixer Upper inspired doll house. Yep, one very creative parent used all of Chip and Joanna's best hacks (shiplap, anyone?) to design one of the most stylish dollhouses around. Needless to say, Fixer Upper disciples are seriously impressed.

Kwandaa Roberts, an OB-GYN located outside of Philadelphia, wasn't pleased with the dollhouse she bought her 3-year-old daughter for Christmas in 2017. The pink and purple toy didn't feel homey enough to Roberts, according to South Carolina news outlet WIS TV, and she couldn't help but give the house a little makeover. Sounds like a Joanna in the making, right? Get Roberts her own HGTV show, stat.

After some hard work, Roberts transformed her daughter's Melissa and Doug dollhouse into a work of art. "I made it an open front, repainted it, added wallpaper and bought new furniture for it," Roberts tells Romper in an email. You can see the before and after snaps below.

The funny part about the renovation is, Roberts couldn't stop "playing" with her creation prior to gifting it to her daughter. "I hid it in the basement, and I would go downstairs and 'play' with the house after my kids went to bed," Roberts tells Romper.

It was only until Roberts was strolling through Target one day (how on-brand) that she got the idea to turn her love of renovating dollhouses into a love letter of sorts to Fixer Upper. "One of my best friends and I LOVE Joanna and Fixer Upper, so when I saw the dollhouse in Target, I bought one for both of us," Roberts writes to Romper. "I thought we could have fun decorating them, even though we're grown ups."

So, after her kids were put to bed (aka self-care time), Roberts worked tirelessly on her Fixer Upper dollhouse. And don't think Roberts scrimped on the fine details — she painstakingly recreated items from the Gaineses' Magnolia Home line and other design staples used by the home renovators.

To get a little taste of the work Roberts put into this Fixer Upper miniature home, here's her description to Romper of what it took to design the living room:

As for the other rooms in the home, Roberts was as equally attentive to the fine details. "For the kids room, I made the little bed from craft wood and clapboards based on one Chip built on Fixer Upper," Roberts tells Romper.

This is absolutely amazing!!!!!! Seriously, my mother and I decorated our girls chip and Joanna dollhouse for Christmas with wreaths and lights but I’m telling you what, this is on a whole different galaxy scale! Honestly, this is THE most creative thing I’ve ever seen! I hope something big comes out of this for you! SO MUCH TALENT!!!!!!!!!

"I just can’t stop looking at these pics!! I want to live here," another admirer chimed in.

"You gave me real inspiration that I’ve been searching for in redesigning my master bathroom," someone gushed about the dollhouse's bathroom.

Oh, and if you're wondering if Roberts' daughter gets to play with the dollhouse, that's a no. As it turns out, Roberts got so invested in the work that it's now an adults-only toy, which seems fair given how much time she spent on the project. "Most of the items in it are rated for ages 14 and older," Roberts added in her email to Romper.

Although the main takeaway here is that Roberts is quite talented (and a Fixer Upper expert, of course), I think it's also worth pointing out that this is a great example of a parent exercising self-care. What started out as a present for her daughter turned into a full-fledged hobby for Roberts, and it's wonderful to see her creativity put to practice. And there's a good chance Chip and Joanna would be proud of her work.