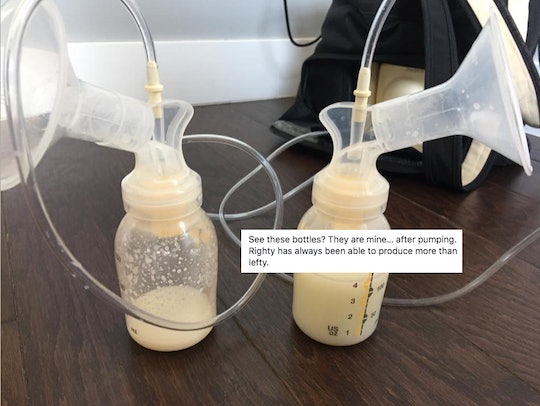 As if being a mom wasn't hard enough, there's the internet to deal with, too. Yes, there are lots of positive things about all of this access to the World Wide Web — social media and Google make a lot of things easier, whether it's finding a quick weeknight dinner recipe or keeping yourself sane by swapping parenting memes with friends on Facebook. But it also means an onslaught of information about whether you're doing this whole parenting thing "right." Especially when it comes to what you're feeding your infant, which is precisely why this mom's argument for formula-feeding has touched so many women second guessing their choices.

Feeding an infant or a toddler is hard enough without so many different opinions and recommendations flying through a social media timeline or circling around the playground. It doesn't help that our culture often only lauds women for breastfeeding.

As it should! Too many women are shamed for feeding in public and the American Academy of Pediatrics recommends breastfeeding solely for at least 6 months to a year old. There are a lot of reasons to champion breastfeeding, but there are just as many reasons to give a standing ovation for formula-feeding moms. The lack of love around formula-feeding can result in a lot of mom guilt.

Enter Leslie Means, a Nebraska-based mother of three and the brains behind the lifestyle website, Her View From Home.

This week, Means posted a picture of two pumps semi-filled with breast milk. She admitted that her right breast always produced more milk than the left one, hence the disparity in volume. Means elaborated in her Facebook post:

There’s 4+ ounces in one, half an ounce in the other. Could I have tried and tried and eaten better things, and visited more lactation people and spent more time to get lefty to work? Probably. Did I choose my sanity instead? You bet. See, this milk is for my 5-month-old. He’s my third baby. He is also huge. He gets a combo of breast milk and formula. Trust me. He’s doing great.

She added that her two older toddlers got the same combo and rightfully pointed out that she herself, born in 1981, got mostly formula. (Which by the way, was pretty common back then as breastfeeding trends evolved.) Then she touched on what every mom needs to hear now and again: Whatever you're doing is the best thing. To heck with "breast is best." Parents know what works for them, their kids, and their lifestyle, parenting forums be damned.

Means' post resonated with so many women. One commenter on her Facebook page wrote, "God I wish I could hug you! Sometimes it feels like your [sic] alone in this until you read a post from a fellow mama. I needed this today!"

Others chimed in joking about all the reasons their pumps looked similar to the ones pictured on Means' page, whether it was because of taking antibiotics, being stressed out, or just not being able to get there with their newborn. There are tons of reasons a mom might choose to strictly formula-feed or supplement, none of them better or worse than the other.

And frankly, it's no one's business what a mother feeds her children. Cheers to all the formula-feeding moms who DGAF out there.