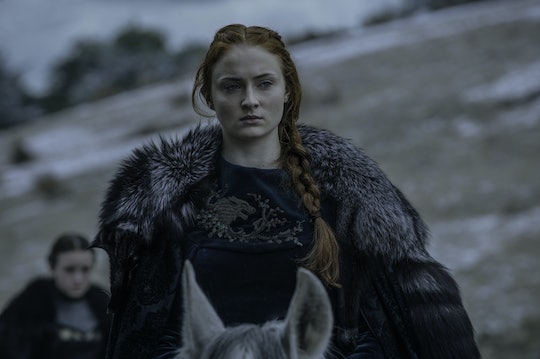 Ever since Sansa escaped the maniacal clutches of Ramsay Bolton at the end of Season 5 of Game of Thrones, fan theorists everywhere have been tossing in the rumor that Sansa is pregnant. And I'm not gonna lie, that would be an incredible twist and the perfect next-awful-thing to happen to the character who gets the short end of the stick the most. But while you're asking yourself, "Is Sansa pregnant on Game of Thrones?" you should also be considering the alternative. Because there is one important clue you missed in Sunday's episode of Game of Thrones that totally debunks the Sansa pregnancy rumors. Right before Sansa fed Ramsay to his dogs (totally fitting, don't you think?), she gave him some food for thought. Pun totally intended. Sansa said to Ramsay that once he was gone, "Your words will disappear. Your house will disappear. Your name will disappear. All memory of you will disappear." Meaning that nope, there is no baby Bolton bun currently cooking in her oven.

More Like This
20 Candid Photos Of Queen Elizabeth With U.S. Presidents Over The Years
Kate Middleton Talked About Baby Lilibet & Fed Some Rabbits While Meeting Jill Biden
25 Great Sci-Fi Movies To Watch As A Family
Angela Kinsey's Daughter Dressed As Her Character From 'The Office' & Wow, The Sass!

Now, before you get back on the Sansa is pregnant bandwagon because Ramsay had to get his two cents in and be all, "I'm a part of you now" before he died in Sunday's episode of Game of Thrones, know this: before now, Sansa had never killed anyone. Yes, she watched Joffrey die at the Purple Wedding and she certainly helped Petyr Baelish cover up the murder of her Aunt Lysa, but Sansa had never personally gotten her hands dirty with murder. When Ramsay told her that he was a part of her now, he wasn't confirming the fan suspicion of Sansa being pregnant, but instead getting in one last jab at the poor girl, insinuating that she was no better than him now.

Of course we all know this to be untrue, since the last time I checked, Sansa still isn't into flaying men alive and castrating them. But it could be said that now that she's taken someone's life herself, she will be even more hardened than she was already becoming. It's to be expected, and maybe she could learn a few pointers from the young Lady Lyanna Mormont, but pregnant she is not.

Ramsay's specific torture tactics may have not been adopted by Sansa, but in telling her that he is a part of her, he was driving home the idea that his ruthlessness and cruelty has now been born inside of her and that because of him, she won't be the same. Basically, he's trying to take credit for this new Sansa transformation, but when Sansa released the hounds and walked away she was just like, "Boy, bye," because as much as Ramsay wanted to take credit for Sansa's bravery and survival, he was just a tool in showing us how far she's come.

If Sansa is pregnant on Game of Thrones, it just wouldn't make sense right now. There is no place for (another) unwanted baby in Winterfell and like I said, Sansa has come pretty far. She is likely going to continue to play a prominent part in the wars to come and it's been made abundantly clear that the baby-bearing, husband doting girl she once wanted to be is gone. And no, not because Ramsay made her that way at all. But because, as she said herself, she did what she had to do to survive.