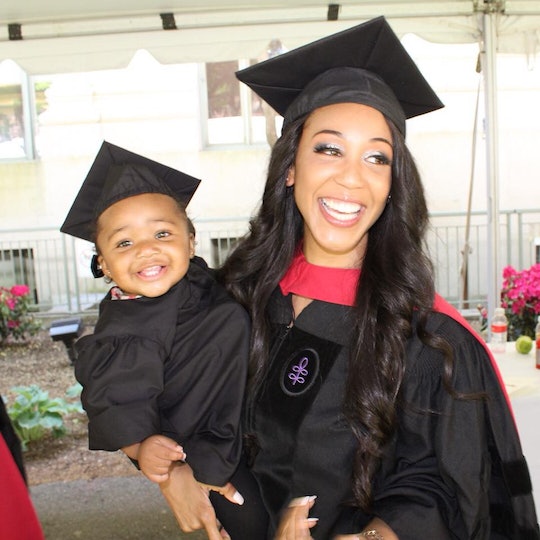 This Single Mom Who Took A Final Exam While In Labor Just Graduated, So Prepare To Sob

When put in a difficult situations, moms have a way of rising to the occasion, pushing through difficult times, and getting sh*t done. Whether it's a feat of physical strength — during childbirth, for example — or it's because of their emotional/mental strength during less-than-ideal conditions, mothers have proven time and time again that they don't give up easily. Here's a perfect example: This single mom who took a final exam while in labor just graduated. And it's so inspiring.

Briana Williams graduated from Harvard Law School last week, but it hasn't been an easy road. As PopSugar reported, the single mom actually went into labor in April 2017, during an exam period. "I immediately requested an epidural so that my contractions wouldn’t interfere with my Family Law grade," Williams explained in her now-viral Facebook post. "And, with tears in my eyes, I finished it. This 'biting the bullet' experience is quite quintessential of my time at Harvard." The proud graduate — who accepted her diploma while holding her 1-year-old daughter, Evie — went on to detail all of the obstacles she had to overcome this past year in order to reach her goal, USA Today reported. Spoiler alert: you might want to grab the tissues because her story is inspiring AF.

To say that my last year of law school, with a newborn, and as a single mom was a challenge would be an understatement. Some days I was so mentally and emotionally fatigued that I did not leave my bed. I struggled with reliable childcare. It was not atypical to see me rushing through Wasserstein to the Dean of Students’ office with Evelyn in her carriage, asking DOS can they keep her for a few until class was over. If not, she’d just have to come with me to class. Evie attended classes often.

Williams confessed that she didn't always think it was possible accomplish her goal, Yahoo! Style reported. In fact, some days she couldn't even manage to drag herself out of bed because the pressure of it all was so intense. "I did not think that, at 24 years old, as a single mom, I would be able to get through one of the most intellectually rigorous and challenging positions of my life," the young mom wrote on social media. "It was hard. It hurt. Instagram can make peoples’ lives seem seamless, but this journey has been heartwrenching."

But people, she totally did do it. Like the bad*ss she is, Williams finished her last year at Harvard Law School as a single mother. And she earned every second of walking on that stage with her little girl — who I might add, was wearing a matching cap and gown, just like her mama.

Today, Evelyn in my arms, with tears streaming down my face, I accepted my Juris Doctor from Harvard Law School. At first, I was the anomaly of my [marginalized] community. Then, as a single mother, I became a statistic. Next, I pray that- for the sake of my baby, I will be an example. Evelyn- they said that because of you I wouldn’t be able to do this. Just know that I did this BECAUSE OF YOU. Thank you for giving me the strength and courage to be invincible. Let’s keep beating all their odds, baby.

Let's just say Facebook had all the feels going on.

"I can't love this enough! Your strength and determination is beyond admirable," one Facebook user commented.

"Congratulations! You are an example for all young people that think they can't follow their dreams!! Every thing is possible!!" another person commented.

To me, Williams' story is undeniably inspiring. At the same time, though, should new moms have to jump through so many hoops prove they're "worthy"? I can't imagine tackling Harvard classes as a full-time student — let alone as a mother. (And a single mom, at that!) For some, Williams' story could be viewed as an example of the absurd expectations we put on women. (For example: Was she actually expected to finish her final exam during labor? Or did she do it so she wouldn't have to worry about finishing the test while recovering from childbirth?) On the other hand, it's awesome that Williams was allowed to bring her baby with her to class, when she was in a pinch. More policies like this could do wonders for student-moms.

It seems this rockstar mama was motivated by the odds that were stacked against her; she remained driven because she was expected to fail. Which, I'm sure, makes walking across that stage — with her baby girl in tow — to accept her diploma that much sweeter. Congrats, Briana, on your amazing accomplishment!