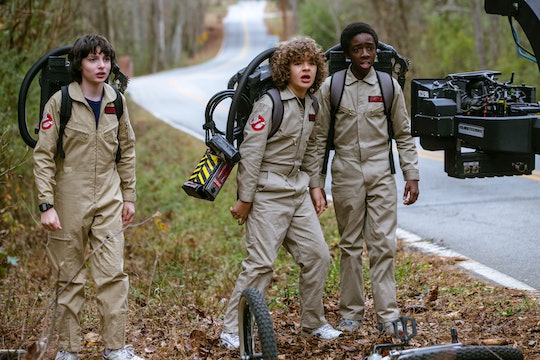 As a mother, I often wonder what the world will look like when my son enters into it free from my watch and, in turn, my care. As a sexual assault survivor wading through the triggering wake of multiple sexual assault, harassment, and rape allegations brought against Harvey Weinstein, spanning over 30 years — along with the infuriating silence of men who knew what was happening and did nothing — that future looks bleak, at best. And yet, Finn Wolfhard, the 14-year-old Stranger Things actor who is leaving his talent agency after an agent was accused of sexual assault, gives me hope. I cannot help but look at my son and wish with all I have that he will be better, do better, than the men who've become complacent participants in the systemic sexual harassment of women. So for me, hope is a powerful thing.

E! News was first to report that Finn Wolfhard was leaving APA after his former agent, Tyler Grasham, was accused of sexual assault. At 14 — the age when Molly Ringwald told The New Yorker a married film director stuck his tongue in her mouth on-set — Wolfhard has answered to Hollywood's culture of sexual abuse and harassment by gracefully refusing to go along with it. If only so many grown-ass men in his industry had done so, instead of refusing to act for more than 30 years while Weinstein was allegedly assaulting and harassing women. This young man, who cannot drive a car by himself, purchase a pack of cigarettes, or carry a case of beer out of a local convenient store, has outclassed them all. This is who I want my son to grow up to be.

I've shared my sexual assault story multiple times. I've whispered it amongst friends, told it to a detective as I sat on an examination table at a local hospital, and pushed it from my trembling lips into a microphone in front of 1,000 people. I am drained. I am angry. I am tired of cutting open the most painful parts of my past and bleeding publicly in the hopes sexual assault survivors and our stories are heard and taken seriously and amount to a substantial shift in a culture that refuses to acknowledge that an estimated 321,500 victims of sexual assault every year. And yet, to the mother of a son who will probably grow up to identify as a man in a patriarchal society that will undoubtably favor him and his privilege, allowing teachable moments about consent, sexual assault and harassment, rape culture, and the like to pass me by isn't an option. I just wish more men — fathers or not — felt the same.

If you doubt the lack of courage or conviction among Hollywood's powerful, consider the actions we have on record. According to The New Yorker's report of Weinstein and his misconduct, his treatment of women was a "well-known secret" in Hollywood. George Clooney said he heard "rumors" about Weinstein in the '90s, but "took them with a grain of salt" and said nothing of his harassment until Weinstein's alleged victims came forward. Clooney told The Daily Beast, "I've known Harvey for 20 years. He gave me my first big break as an actor in films on From Dusk Till Dawn, he gave me my first big break as a director with Confessions of a Dangerous Mind. We've had dinners, we've been on location together, we've had arguments. But I can tell you that I've never seen any of this behavior — ever."

Men need to hold themselves and one another accountable in the spaces they inhabit. ... And right now, that means holding up a 14-year-old boy as an example for my son, instead of the 20 male actors and directors who worked with Weinstein in some capacity over the years and remained silent.

Until Clooney — and arguably many men in Hollywood just like him — had definitive proof, which apparently means seeing sexual assault, harassment, and/or rape with your own eyes, he was going to give the benefit of the doubt to the assailant. He was going to err on the side of caution, which one could argue meant protecting his career and his fortuitous relationship with a successful Hollywood producer. The never-ending harassment and assault was a "woman's problem," and in certain instances nothing more than a bi-product of the industry. "A lot of people are doing the 'you had to know' thing right now, and yes, if you're asking me if I knew that someone who was very powerful had a tendency to hit on young, beautiful woman, sure," Clooney told The Daily Beast. "But I had no idea that it had gone to the level of having to pay off eight women for their silence, and that these women were threatened or victimized."

As a culture, we've come to accept a certain level of sexual harassment and assault as a regrettable inevitability, while simultaneously doubting victims when they come forward. "It's just part of the job," but also, "They're lying and accusing him for attention." It's, "Why didn't you come forward sooner?" but also, "How much were you drinking and what were you wearing and why didn't you stop it?" The confusing and hypocritical dynamic would be interesting if it wasn't so infuriating and, for a sexual assault survivor raising a son, terrifying. So a young man simply hearing about accusations of sexual assault brought on by a man he works with, and doing something tangible that not only holds the accused accountable for his alleged actions but sends a strong message, is what I hope to be the sign of a new generation of men: feminists who know systemic sexual assault and harassment isn't a "woman's problem." It's a human problem.

Because something has to change, and that change cannot be carried solely on the shoulders of women and sexual assault survivors. Men need to hold themselves and one another accountable in the spaces they inhabit. They must refuse to remain silent when they hear about or witness acts of sexual violence against women. They must do more than offer words of condemnation and after 30 years of sexual assault, harassment, and rape finally comes to an end. And right now, that means holding up a 14-year-old boy as an example for my son, instead of the 20 male actors and directors who worked with Weinstein in some capacity over the years and remained silent.

Because if a child knows better, and does better, so should adult men.