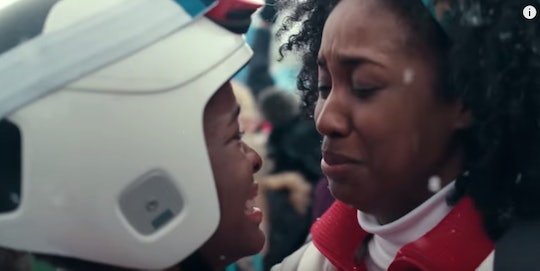 This 'Thank You, Mom' Ad About The Olympics Has The Internet Sobbing

When I look at my sons, big and tall and mostly grown as they are, I never see them the way they are right this second. I see the boys they once were, the men they are now, and the men I think they'll grow to be. I see possibility, but I also see doubt. Because I know all too well how hard it has been for them to become the people they are, to continue working towards the men they hope to be. I think this is why this "Thank You, Mom" ad from the Olympics has hit me so hard in the feels. Because it's such a great representation of how so many moms see their kids; see their struggle, their success... see all of it, all the time.

Procter and Gamble recently released another installment of its ongoing "Thank You, Mom" campaign, this time tied to the 2018 Winter Olympics. The commercial is called "Love Over Bias," and features several story lines following mothers watching their kids struggle. Struggle with a physical disability, struggle with racial or gender or culturual bias, struggle to find their own identity. Perhaps one of the most brilliant things about the commercial is watching the faces of these mothers, who try to keep their emotions to themselves to support their kids. Get those hankies ready, folks, because here is the video from P&G, set to the tune of "Ooh Child (Things Are Gonna Get Easier)."

The stories highlighted in the commercial are actually inspired by the stories of real Olympic athletes, like Olympic medalist Elana Meyers Taylor, who was one of the first woman to ever be part of a four-person mixed-gender bobsled team. As Meyers Taylor told Huffington Post:

She also admitted that watching the new P&G commercial was emotional for her.

I know how much my mom has impacted my journey and how much I wouldn’t be where I am without my mom. As much as she says she’s proud of me, I’m even more so proud of her because of what she’s done and how she’s been able to raise me and my sisters.

Meyers Taylor wasn't the only one to get emotional over the commercial either. The internet has been quietly sobbing ever since it was first released 100 days ahead of the Olympics on The Ellen Show.

And just when you think you've sobbed enough, several Olympic athletes hit the internet to praise the commercial, using it as an opportunity to than their own moms for all they had done to help them get where they were going on their journey.

At the end of the poignant video, the tag line reads, "Imagine if the whole world could see what a mom sees."

And perhaps, for just the span of a few moments, this commercial makes that possible. Invites the whole world in to see what moms see when we look at our kids; infinite potential. Determination mixed in with heartbreak. The ability to keep trying again and again, no matter how hard it might be.

This is truly what it is to see through the eyes of a mother.