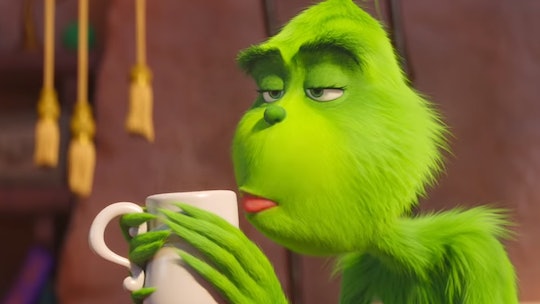 'The Grinch' Blu-Ray Is Coming, So You Can Watch His Heart Grow All Over Again

How the Grinch Stole Christmas is easily one of the most popular holiday stories of all time, but it doesn't have to be December in order for you to enjoy it. Whether you're already counting the days to Christmas in January — or just want to add the physical movie to your collection, 2018’s The Grinch will be released on Blu-ray on Feb. 5. And this exclusive clip of The Grinch will definitely make you want to get in the holiday spirit all over again.

The clip is all about the gadgets in the newest Grinch installment that hit theaters back in November. Yarrow Cheney, one of The Grinch directors, explains in the video that the Grinch himself has to be someone with a lot of ingenuity, which is where all of his little Whoville-specific gadgets come from.

Chris Meledandri, the founder and CEO of Illumination, says in the clip that when everyone got together to figure out just how the Grinch pulls off his mission, they treated it "like a grand heist." If you've seen the movie, you'd probably agree that it certainly seems that way, with all of the Grinch's larger than life inventions that help him steal every bit of Christmas evidence from Whoville.

The Grinch wasn't a complete retelling of the original classic, but it did focus more on the Grinch's actual Christmas theft rather than his backstory like the live action 2000 version did. And, according to Benedict Cumberbatch, who lent his voice to the title character, The Grinch is all about compassion in Whoville and in the real world.

"I think we live in a world where a little bit of understanding and empathy goes a huge way, and it’s not just been about good versus evil, right and wrong, left or right, blue or red, it’s a little bit less binary than that. And I think that’s an important thing," Cumberbatch told IGN. He explained that "it leaves room for forgiveness and understanding and love and acceptance" and that at its core, the movie is "about redemption."

The character of the Grinch has always been one who seemed like he was on the cusp of wanting to fit in, but could never bring himself to admit it. Of course Cindy Lou Who is the magic ingredient in every version of the story to help the Grinch see the error of his ways. The Grinch is no different, but the gadgets were arguably one of the highlights if the latest Grinch movie.

There's something so impressive about a full-body hair brush that you step through in order to get every strand of body hair perfectly in place. Or the “dog drone” that carries Max from the Grinch's mountaintop down to Whoville. For the record, I do not condone any non-animated versions of the movie's dog drone, but it was just one of many Grinch gadgets that helped make the movie.

The Grinch is one of those Christmas movies that literally anyone can enjoy and pretty much any time of the year. Trust me when I say your toddler will be asking you to pop in that Blu-ray in mid-July without a second thought. Since the physical copy offers a lot of extras that the digital versions sometimes don't, at least you can switch things up and won't be trying to *misplace* the disc. You can buy the digital copy now or wait until Feb. 5, when the Blu-ray and DVD are both released. Either way, expect to add it into your family’s rotation of movies that are played on a never ending loop in your home.