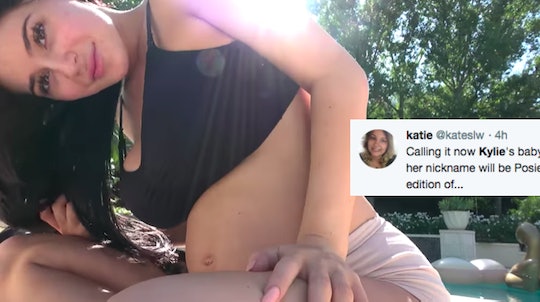 This Theory On Kylie Jenner's Daughter's Name Considers Every Clue We Know, & I'm Here For It

Even after months of speculation, no one saw it coming: On Sunday, Kylie Jenner simultaneously confirmed her pregnancy and announced the birth of her first child with boyfriend Travis Scott, according to E! News. Of course, the internet went wild after the lip-kit maven dropped the bombshell news through a heartfelt Instagram post. But Jenner left out one key detail: Her daughter's name. So what will Kylie Jenner name her baby? This one fan's theory makes a heck of a lot of sense.

Earlier: Jenner revealed on social media Sunday that she and Scott welcomed their first child on Feb. 1, E! News reported over the weekend. Speculation of her pregnancy first began circulating in September, when TMZ reported that she was expecting according to multiple sources. But the 20-year-old reality star didn't confirm the rumors, and kept herself out of the public eye over the last few months. Now Keeping Up With The Kardashians knows why.

In her announcement, Jenner didn't reveal her baby's name. But Twitter user @kateslw has a pretty convincing theory. She wrote on Twitter Monday morning,

Calling it now Kylie's baby will be called Mariposa (Spanish for butterfly) and her nickname will be Posie, like the lip kits she's just brought out an anniversary edition of...

She's not the only one who thinks Jenner will name her baby something related to butterflies, although her theory is the most solid of the bunch. Fans noticed the Life Of Kylie star used a lot of butterfly imagery in her birth announcement video she posted to YouTube on Sunday, according to Cosmopolitan. Two clues jump out: In the video, Jenner gives a tour of her daughter's nursery, which is covered with butterfly decorations. She is also seen wearing a blue and purple butterfly necklace, with another necklace above it that reads "baby girl," according to Glamour.

That's not all: Fans believe Jenner and Scott dropped other butterfly-related clues on social media over the last nine months. As Glamour pointed out, the couple has matching butterfly tattoos, and in May of last year, Scott dropped the track, "Butterfly Effect." Plus, a few weeks back, Jenner shared a photo on Instagram that showed her wearing a multi-finger pink and gold butterfly ring. Honestly, all the signs are there.

So what butterfly-related names are on the table? Other than "Butterfly" and "Mariposa," some fans of the Kardashian-Jenner family have thrown out "Monarch" (monarch butterflies), "Vanessa" (a brush-footed butterfly species), "Nessie," "Chrysalis" (the pupa of a butterfly), or "Ulysses" (another type of butterfly).

Jenner's pregnancy and birth reveal comes a little more than a month after big sister Khloé Kardashian confirmed she is pregnant with her first child with NBA star Tristan Thompson. Rumors surrounding Kardashian's pregnancy began circulating around the same time tabloids reported that Jenner was expecting. Both sisters kept mum on the subject for months, and both used Instagram to break the news.

In her Instagram post on Sunday, Jenner apologized for keeping fans "in the dark through all assumptions." She acknowledged that her fans are used to following her journeys, but her pregnancy was one she "chose not to do in front of the world."

Whether Jenner and Scott name their baby girl "Monarch," "Butterfly," or "Mariposa," there's no doubt that she will be loved unconditionally. Congrats to the happy couple!