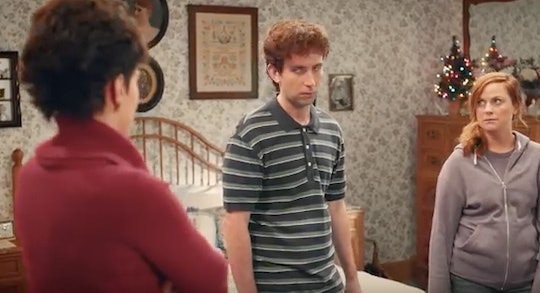 Last week's Saturday Night Live episode - hosted by soul sisters and comedy powerhouses Tina Fey and Amy Poehler, with musical guest Bruce Springsteen- was hailed a success. So, I can't imagine what viewers would have though if this unaired SNL Skit showing two siblings fighting during Christmas, had actually aired. Because, well, we have all been there and this representation of arguably every brother/sister dynamic is as hilarious as it is accurate.

The skit, which was unfortunately cut for time, shows a disappointed mother (played by the always-hilarious Kate McKinnon) scolding her son (played by Kyle Mooney) and her daughter (played by Amy Poehler) for arguing. McKinnon tells the two squalling siblings that they better get along, because "Nana" is "dying, she's dying fast". So unless the two "get it together", they won't be opening presents.

Stuck in a room and forced to "figure it out", the Mooney and Poehler reenact every fight we've all had with our older or younger siblings. From passive aggressively mumbling to calling one another lame and out-dated insults to, eventually, realizing you're both awesome because no one could be worse than your parents, the never-before-seen skit may have hit the cutting room floor, but it also hits oh-so-close to home.

Seriously, stop me if you've used these sibling slights before.