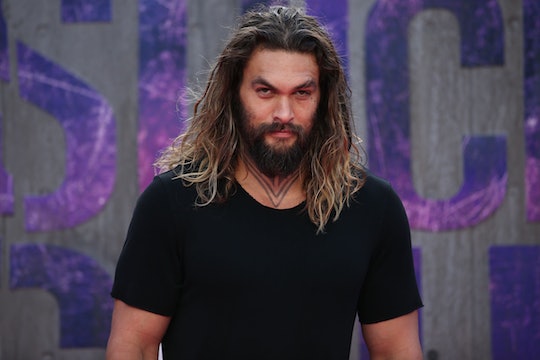 On Thursday, an old video of former Game of Thrones actor Jason Momoa began making the rounds on Twitter — and it's not pretty. This video of Jason Momoa making a rape joke is actually really hard to watch. At a 2011 San Diego Comic Con panel for the HBO show, Momoa was asked about how it felt to work on a fantasy show compared to a sci-fi. Momoa responded, "I've never been a part of anything remotely close to this," adding that he likes both genres because these shows let you "rip someone's throat out and rape beautiful women." As his GoT cast mates visibly face palmed (but didn't verbally condemn him), the audience's reaction is especially disturbing — they all laugh.

Update: Momoa's publicist responded to Romper's request for comment, with the actor releasing the following statement posted on Instagram in response to the controversy on Thursday evening:

I awoke in Australia to the justified reactions by many people to a distasteful joke I made years ago in Hall H for which I am sorry. I am still severely disappointed in myself at the insensitivity of my remarks that day. I know my sincerest apology now won't take away those hurtful words. Rape and sexual harassment can reach anyone and I have seen first hand its painful torment among members of my own family and friends ... I made a truly tasteless comment. It is unacceptable and I sincerely apologize with a heavy heart for the words I said.

Earlier: There are claims on Twitter that Momoa apologized for the remark, though there is no video or written proof of that statement. In 2011, Momoa told MTV News filming his rape scenes for GoT was "one of the hardest things I've ever had to do," and many people took that to be an indirect apology, though he did not mention his Comic Con answer.

While a large portion of reactions on Twitter have condemned Momoa specifically, there's an equally large swell of voices telling those bothered by the clip to "get over it" because it was "just a joke." At issue here is not just that it was Momoa specifically who made a disgusting rape joke: It's that Momoa's foot-in-mouth attempt at humor — and the audience's tacit approval by their laughter — is indicative of just how pervasive and normalized rape culture is within our society. Momoa could've been anyone, because, unfortunately, these jokes are made daily, and people are still laughing at them.

As parents, this is important to talk about because Momoa is a father of three: one daughter, one son, and a step-daughter with wife Lisa Bonet. Parents have a responsibility to not only fight rape culture themselves, but to teach their kids about rape culture and that yes, they need to step up and fight it, too — if only because one day, they could find themselves in situations where issues of consent and bodily autonomy matter and they better hope someone clued them in.

But even more importantly: You shouldn't have to be a father of boys, or even a parent at all to know that rape and jokes about rape are not OK. They aren't funny. All they do is perpetuate the false idea that "rape is just a normal part of life" — it's not. Rape is not normal and should not be normalized. Every casual joke about rape just gives the act itself further credence and grants permission and power to would-be rapists.

And if you don't think that rape isn't normalized, then you're not paying attention to the Harvey Weinstein scandal and how women have been systematically silenced for speaking out about sexual coercion and assault in Hollywood. Weinstein's representative told The New Yorker he denies any allegations of non-consensual sex, though Weinstein admitted to sexually harassing women and said "that was the culture then." His reps have not returned Romper's request for comment.

It's beyond infuriating that it takes such high-profile cases — like the Weinstein scandal, Momoa's 2011 rape joke, or even Bill Cosby's unmasking as an alleged serial sexual predator (he denies all allegations but is on trial for one) — for everyone to start paying attention to the fact that rape culture is real.

Whether it was the 2016 election, Trump's "p*ssygate," or something else, people are finally starting to "get woke" about rape culture and the need to do something about it. And that's exactly why a six-year-old Comic Con clip of Jason Momoa making a rape joke is on everyone's radar: We're not being "snowflakes." This sh*t has got to stop.

What does the tipping point have to be if even a presidential candidate is caught on tape saying he can grab women by the p*ssy because of who he is and yet he still becomes president? I'd be willing to bet Momoa regrets ever having cracked that rape joke, and being married to Lisa Bonet, you would think maybe he'd be sensitive to the pervasiveness of rape culture (see: Bill Cosby). Look, I wish it wasn't Jason Momoa either — but it is getting people to pay attention and talk about rape culture.

As the parent of a boy, I can confess that literally the very first thing that entered my mind after finding out from the ultrasound tech I was having a boy was this: "Oh my god... How do I teach him about rape culture and positive masculinity?" Even parents with the best intentions may be reinforcing rape culture to their kids without even realizing it, just like Momoa did at that Comic Con panel — and like every audience member who laughed at his joke did, too. We have to do better — and be better — for our kids.