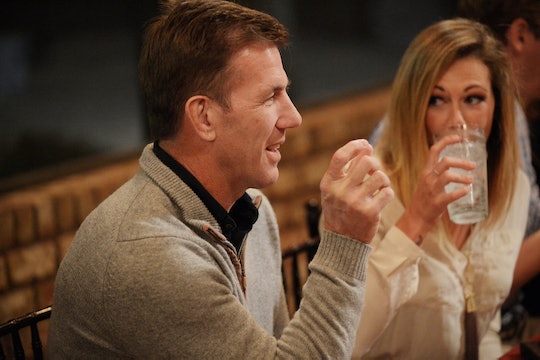 Thomas' Girlfriend On 'Southern Charm' Has A Totally *Relatable* Instagram

Since Thomas Ravenel introduced his new girlfriend, Ashley Jacobs, to the world and to his co-stars on Southern Charm Season 5, it’s been clear that she’s here to stay. That’s probably a good thing, since she made the move all the way from California to be with him to start a new life there, more than 2,000 miles from her own hometown. But with a show like this, change is always good and Thomas' girlfriend’s Instagram proves the new Southern Charm star is completely relatable and lovable in real life and not just on the show.

As some fans already know, Ashley was a nurse in her previous life in California and while it's unclear if that career is going to carry over to her new life in Charleston, it’s just one of many things that make her so easy to like, maybe even more so than some of the other high society cast members of the show. That’s not to say that Ashley doesn't have what it takes to fit in among the southern elite, because she certainly does, but bringing her into the fold has been like a breath of fresh air and her Instagram proves that she really is as genuine as she seems on the small screen.

It’s definitely refreshing when a new cast member comes on the show who isn't involved in trying to open a restaurant or dedicating their social media profiles to making a brand for him or herself. Instead, Ashley is totally down to Earth and the fact that she’s also a nurse just makes her all the more admirable and likable.

She also goes to baseball games and can enjoy a beer or two like the rest of us. I’m sure the same could be said for some of the other cast members on Southern Charm, but by comparison, Ashley definitely seems like she hasn't yet been bitten by the reality TV stardom bug. So here’s hoping that she stays as relatable and lovable for as long as possible, even if she may not be Kathryn Dennis’ favorite person right now.

Since meeting Thomas last May (the couple just celebrated their first anniversary, by the way), Ashley has been open about their relationship on Instagram and continuously posts the kinds of sappy captions that make you want to fall in love too. But between galas and other fancy events, Ashley and Thomas found the time to visit Disney World. If that doesn't automatically gain her an abundance of cool points, then Southern Charm fans are just heartless.

And when she was in a wedding in 2016, she had no qualms about poking fun at herself for being “always a bridesmaid.” Of course, now she might actually be closer than ever to being a bride instead, but there’s still time to see how her relationship with Thomas unfolds and progresses while being on Southern Charm together.

Although she moved across the country, Ashley seems to be really close to her family, which includes a sister and at least one nephew. Honestly, the most important thing is that her Instagram isn’t filled to the brim with advertisements and paid sponsorship ads. Instead, she still seems like a normal, everyday person who just so happens to have entered into a relationship with someone on a reality TV show.

So far, it’s hard to tell how much of a presence Ashley will have on Southern Charm in future seasons, but since she’s a huge part of Thomas’ life and he’s one of the core cast members on the show, she’s probably not going anywhere.