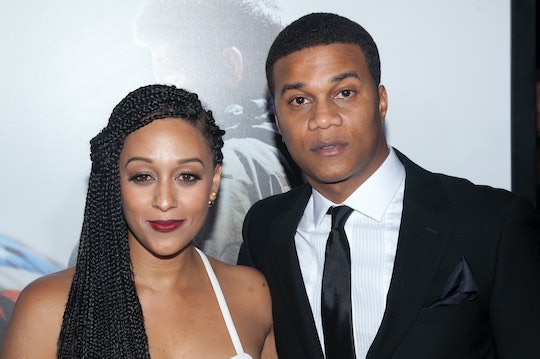 During a soon-to-be-released interview on the What To Expect podcast with host Heidi Murkoff, Tia Mowry admitted she schedules sex with her husband to ensure they get a little romantic time together and bless her for owning it. After all, this is something plenty of parents are probably doing, or thinking of doing, but might not want to admit.

The Sister, Sister alum has been married to husband Cory Hardrict since 2008, so that's 12 years of wedded bliss. Not to mention two kids together; the couple shares 9-year-old son Cree and 2-year-old daughter Cairo. Between being a mom, wife, as well as an actress, YouTube star, and cookbook author, that's a lot of hats to wear for one person. And as Mowry recently shared, she turns to her schedule to keep everything in line. Including sexy time with her husband.

In a preview of the episode shared with People, Murkoff, the author of What To Expect When You're Expecting, admitted on her iHeart Radio podcast that she had scheduled "sex dates" with her husband in the past and Mowry confessed that she does the same. "Heidi, this is the first time I'm admitting it; we do too," Mowry responded.

The busy mom went on to admit that when she was younger, she didn't really understand when people said they were scheduling sex. But that all changed with kids. "But like you said, you do — especially with kids and with work and all that. You have to make sure that it's not neglected in any kind of way," Mowry said in the clip shared with People.

Raising kids can wreak havoc on parents' romantic relationships. Between the physical exhaustion, trying to wrap your heads around your shifting identities, the extra work, feeling "touched out" by the end of the day, there are lots of reasons to schedule sex.

While scheduling sex might not have been what Mowry expected in her marriage, both she and her husband have been open about prioritizing their relationship. In 2017, the couple sat down for a question and answer period from fans on her YouTube channel Quick Fix to discuss the secrets to a happy marriage. Mowry said she believed "forgiveness" and "uplifting your partner" were key, while Hardrict admitted that he doesn't "go to bed angry." Also, as Mowry shared, Hardrict "kisses me every single night before we go to bed."

Mowry certainly isn't the only mom scheduling sex with her partner, but it's sort of great when a celebrity helps normalize things that should have been normal in the first place.