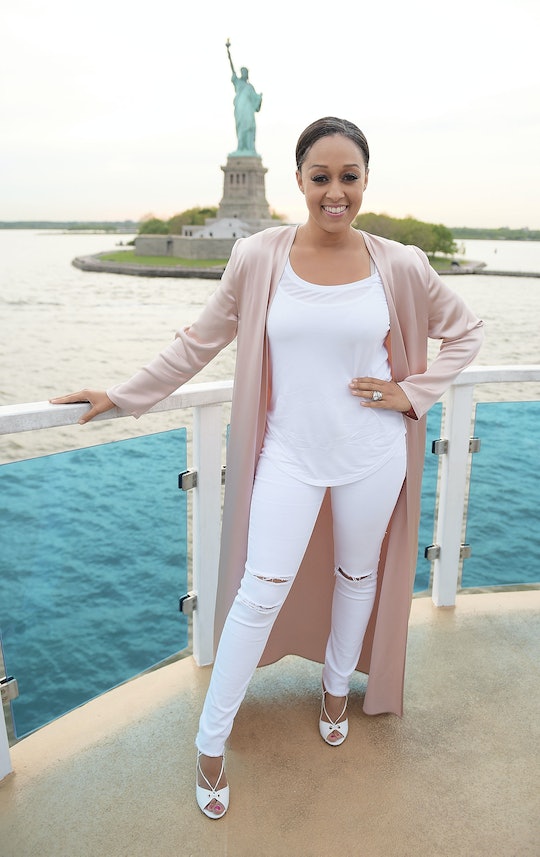 Social media has its benefits and pitfalls, like everything else. But one of the better things about social platforms is that it gives women a chance to connect with each other in a really nice way, when they want to. Sure, there are the body shaming trolls. But then there are also the super inclusive, body positive celebs out there reminding the rest of us that real life rarely like it's depicted in glossy magazines. Take Tia Mowry's newest postpartum photo just seven weeks after giving birth, for example. It's the perfect reminder that every woman is different and that what we look like is the least important thing sometimes, to certain people. Especially when you have a newborn to care for and are getting adjusted to your new life.

Mowry gave birth to her second child with husband Cory Hardrict in early May. She also has a 6-year-old son, Cree Taylor, so she's likely been a little preoccupied with parenting. She posted a selfie this weekend of herself at home in a pair of leggings and a white t-shirt. She captioned the picture, "Some #pregnant women after giving birth no longer have a belly after [seven] weeks. While others it may take a little longer."

Mowry added, "Me, I’m the latter. I remember after giving birth to Cree, my belly didn’t all of a sudden go flat. I did have a C-Section, (as well as with my second pregnancy) and I thought something was wrong with me. I had seen in magazines the many women on the beach a few weeks #postpartum in a two piece. To be honest, it had to take time for me to embrace my new body."

She concluded that this time around she's embracing the fact that she "housed a human being" and her body will do what it wants. Mowry ended by writing:

If it takes a while for me to get back to my normal self, than so be it. This.Is.Me. And I love me.

This is not the first time that she's shared her postpartum body thoughts on social media. In May, soon after giving birth, she shared a similar picture and sentiment on Instagram. Mowry wrote:

This is MY #postpartum. Two weeks in. Do I still have a belly yes. I actually look like I'm 4 months pregnant and that is OKAY. I wanted to shine a light on how our society creates false expectations after a woman gives birth. Ladies, it’s okay that our bodies are not PERFECT after our babies are born. Give your self time. Go at your own pace. Don't allow people to put a time limit on YOUR body.

Fans apparently come to Mowry's feed for a little self care now and again. On her picture this weekend of her postpartum bod, other women weighed in with their own thoughts on their postpartum bodies.

One commenter wrote, "Everyone’s journey is different. I used to be ashamed of my stretch marks but then I realized they’re just a reminder of my beautiful blessings."

Another added, "I’m 5 months postpartum after a C-section and I beat myself up about not 'snapping back.' thank you for this girl."

"I love the realness of your posts! And this really makes me feel better about my belly almost 4 weeks after having my baby! ♥️," yet another chimed in.

Comment after comment lauded Mowry for being "real" and not obsessing about her appearance. Just like everyone's postpartum journey is different, so is everyone's understanding of what "keeping it real" means. For some new moms, that's getting back to the gym and reclaiming the body that they want. For others, fitting into their pre-baby bikini just isn't as much of a priority. There's no right or wrong way to "snap back," as Mowry's fans put it.

So good for Mowry for spreading a little self love just seven weeks postpartum. It's a good reminder for the rest of us, new baby or not, to be a little nicer to ourselves sometimes.