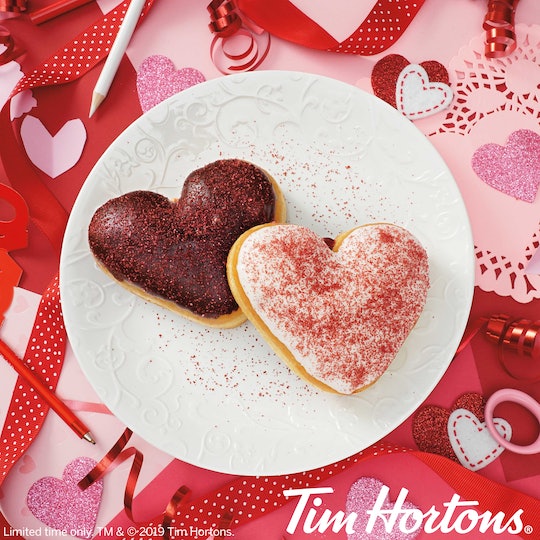 OMG, Tim Hortons Just Debuted Their Valentine's Day Donuts & There Are No Words

Hot take: I'm sick of all the negative attitudes towards Valentine's Day. Sure, I agree it's better to show your love everyday of the year, and there is some truth to the fact that Hallmark manufactures artificial connection for the day, blah blah blah. But I'm of the mind that there's nothing wrong with a little festivity for love's sake once a year, and there's no law that says you've gotta be celebrating romantic affection. And if the official day of love led to the creation of Tim Hortons' limited edition Valentines Day donuts, then I'm all about it.

The coffee and donut chain announced the creation of two themed pastries for Valentine's Day so sweet and delicious that even the most cynical will have to take a break from cursing Cupid to enjoy a bite of the sugary goodness. The treats are called the Vanilla Be Mine Donut and the Chocolate Be Mine Donut, and they're sold as a pair "so you can give one to your Valentine and enjoy one for yourself," as the press release about the donuts explained. (I plan on buying both for myself, but I digress.) The flavors are even better than the cutesy names let on: the Vanilla is a raspberry-jam filled donut dipped in vanilla fondant with red shimmer topping, and the Chocolate is a venetian cream-filled donut dipped in chocolate fondant, also with a red shimmer topping. Um, can you say heaven?

My stomach is growling just thinking about these festive babies, but they're so adorable I almost wouldn't want to eat them and ruin the cuteness. I mean, that's not actually going to stop me from devouring every last bite, but you get the picture. Imagine how sweet they would look waiting on your kitchen table for your kiddos on Valentine's Day morning (if you can resist eating them at midnight yourself). Swoon.

And if for some reason the donuts alone aren't enough to entice you, the breakfast store is also releasing a limited edition Red Velvet line in honor of Cupid, and it looks to die for. They've got drinks and snacks in the most romantic flavor of them all, so you can have all the tasty fun your heart desires. Seriously, it's a Red Velvet-palooza; they've got Red Velvet French Vanilla, Latte, and Hot Chocolate drinks, and Red Velvet cookies, muffins, and White Chocolate Cranberry scones. Brb buying everything. One caveat: Only U.S. Tim Hortons' locations are doing the Red Velvet line, so you'll have to stick to the donut pair if you'll be out of the country on Valentine's Day.

The celebratory treats will be available starting February 6 at participating Tim Hortons while supplies last, so you don't have to wait long at all to get your hands on the deliciousness. I plan on jumping on them as soon as they're released, because I doubt there will be many leftover based on how cute they look and how tasty they sound. You can contact your local Tim's for more info on their website to find out the deets on if your store has the extra fun donuts. Happy V-Day and happy eating!