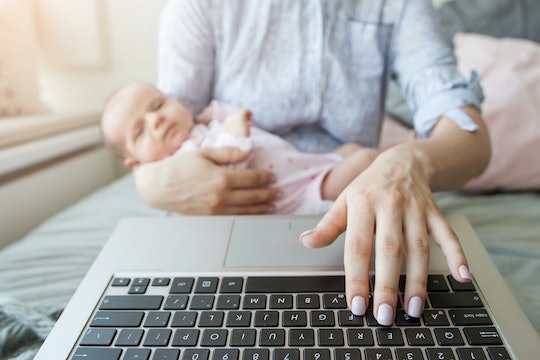 To Be Honest, I Couldn't Survive Motherhood Without Facebook

I'm going to say something deeply uncool right now: I like Facebook. I've never been the type to deactivate or "unplug" for a while. I've never even seriously considered it. I like seeing what my friends and acquaintances (and, yes, frenemies) are up to. I like having a platform to share my thoughts, jokes, and various articles. Plus, it makes motherhood easier and more enjoyable. In fact, I couldn't survive motherhood without Facebook, on so many different levels.

Some of those most basic levels are practical, the first being that it serves a much needed distraction from the "joys" of parenting. And by "joys" I mean, "I have been playing this game of peek-a-boo for 27 hours straight and I'm so goddamn bored so I need to take three minutes to see what the rest of the world is doing right now." It's easily accessible (right in your back pocket) and requires very little mental energy or dedicated attention (in short supply for parents). So when I find those elusive and magical five seconds between the moments when my children require something of me, laughing at a Facebook meme may be just what I need to keep going for the rest of the day.

Moreover, since having children, my ability to get together with friends has been... let's say "diminished." For someone as super-extroverted as me, who needs to be mentally recharged with frequent social gatherings, this could be quickly turn into a mental health issue. Facebook enables me to casually interact with a great deal of people in a way that tricks my hyper-social little brain into thinking, "OK, you're good. You're getting out. You're talking to people." I mean, it's not the same as actually getting out, but it keeps my social life on a simmer if not a full boil. This is to say nothing of Facebook giving me a platform to give all my family members updates on my kids at once rather than make 10,000 phone calls a week. (Even if I had time for that, it sounds like a particularly insidious ring of Hell.)

When I found out I was pregnant in 2011, I was determined that I was not going to be that mom on Facebook.

Facebook also allows me to crowdsource. I don't have a ton of parent friends in real life, but a lot of my Facebook friends are moms and dads. So rather than scramble to get advice from the same, like, two parents friends over and over and drive them nuts, I can just put out on Facebook "Anyone ever deal with teething?" or "What's your favorite brand of kids' shoes?" and get a slew of pretty helpful responses.

But the most important thing Facebook does for me as a mom isn't strictly speaking practical, and it requires a little bit of backtracking.

When I found out I was pregnant in 2011, I was determined that I was not going to be that mom on Facebook. I didn't want motherhood to consume my life or my feed. I wasn't going to be a regular mom, I was going to be a cool mom. One who, yeah, had kids, but didn't let that change her. So I never officially announced my pregnancy online (though it became obvious as pictures of my growing belly went up). I didn't even post anything about my child being born. No first photos with an introduction to the world. I wanted so badly to play it cool. "Oh what? This? Oh yeah, this is my son. I grew him and then he came out of me. But it's, like, so not a big deal. Whatever." Part of this was based on my own weird ideas about what motherhood means, the other part was based on the fact that I was the only one of my friends to have children at that point and I didn't want to alienate myself.

I met Anne on a message board for mothers due in September 2011. Like most message boards, it was a good place to discuss and ask questions but was extra AF. Safe behind the anonymity of screen names, know-it-all pregnant women enjoyed starting flame wars and talking with completely unjustified authority about childbirth and parenting. Sentences beginning with "I'll never" and "All you need to do is" and "When my baby does X, I'll..." were common. So, you know, all the phrases that actual parents laugh at because WTF are you even thinking, newb? Heated and bombastic debates about "natural" birth and circumcision and breastfeeding and working versus being a stay-at-home mom were fairly common. This was exactly the kind of mother I didn't want to be on social media. Once I popped out my little dude, I stopped checking in all together.

"Did you know the September birth board has a Facebook group?" Anne texted me a few weeks after my son was born. "I really think you should join." I wrinkled my nose. Literally nothing about this seemed appealing. So I declined as politely as I could, texting back: "I love you girl, but no f*cking way."

Before I knew it I was connected to all these women, even some of the ones I didn't like initially, in a fundamentally important way.

But the Facebook group was different, Anne assured me. So much of the riff-raff was filtered out. It was more civil, not dramatic, and it was a really nice place to talk about our babies and new motherhood. Besides, all the best people from the board were over there. Peer pressure, kids: it doesn't end in high school.

So I joined, and realized Anne was a damn liar because there was drama, and a ton of people I didn't like all that much, and many of the same flame wars that had been on the board.

But time went on, and, eventually, everyone chilled the eff out. Before I knew it I was connected to all these women, even some of the ones I didn't like initially, in a fundamentally important way. They became the mom village I strongly believe everyone maybe doesn't need but can seriously benefit from. I came to love them and their children. Many stopped being online friends and became actual "Hey, what are you doing later? Let's go to the playground," friends. They showed me so many different ways to be a mother, and that allowed me to explore what kind of mom I was and wanted to be. Maybe it's that aforementioned extroversion, but I learn best among other people, through discussion and social interactions, both of which Facebook provided me in a way my real life couldn't. (Remember, when I had my first, none of my IRL friends were parents.)

While my pre-motherhood friends (to this day mostly non-parents) remained my closest and most indispensable, my Facebook mom friends are important to me in a different way My "real" friends kept me me. Hell, I've been getting to know me for 35 years now, and I don't want to have to put a pin in that just because I had children. At the same time, the mom friends I've become close to on Facebook have given me a space to explore motherhood and what it means to me, not just practically but socially. The discussions we've had, tragedies we've faced, and everything we've learned from one another has encouraged me to embrace this aspect of who I am in ways I don't know that I necessarily would have without them.

So, yeah, I know it's sort of dorky to admit to liking Facebook, but from escapism, to practicality, to building a community I've come to cherish for almost seven years now, it's provided me an outlet for all this confusing, newfound maternity.

More Like This
4 BIPOC Moms On The Beauty Traditions They’ll Never Pass Down
Kids With Head Lice Don't Need To Miss School, AAP Stresses In Updated Guidelines
Can Elderberry Help Prevent Illness In Kids? Doctors Weigh In
What Is RSV?