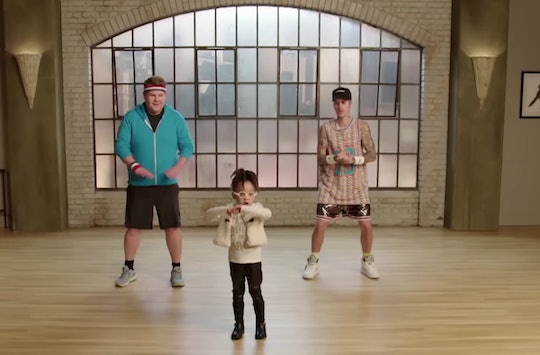 The Late Late Show with James Corden took an adorably entertaining turn when a group of toddlers stepped in to give Justin Bieber and James Corden some intense dance lessons. As you can imagine, the class was hilariously all over the place.

On Wednesday, Bieber, who tied the knot with his wife Hailey in 2018, appeared on The Late Late Show. While there, the 25-year-old pop star and Corden learned some new "Toddlerography" to Bieber's 2009 hit single "Baby."

"Why are you sweating?" Bieber asks Corden. "The class hasn't even started yet."

"I'm just a little jittery man," Corden replies. "These instructors, they don't mess around." As one pint-sized instructor enters the room, she says to them: "Are you ready?" (Narrator: They were not).

Ready or not, class kicks off with a little girl in a tutu teaching the two men to spin in circles while another makes them do a cartwheel, which proves to be a bit of a challenge for Corden. There's lots of running, jumping, and creative dance moves involved, and the guys do their best to follow along.

Beiber and Corden's "Toddlerography" class has already gained more than 3 million views on YouTube since it was posted Thursday and parents especially can't get enough. "I love how there's always a few kids who just run from one side of the room to the other," one accurately pointed out. "That's a universal move." Another shared, "My toddler does similar moves."

This isn't the first time Corden and a special guest have been given a master class led by toddlers. In 2017, for example, some tots taught Jennifer Lopez some new choreography to "On The Floor" and model Gisele Bünchden learned a few new moves in a Toddlerography class the following year.

As for Bieber's class in Toddlerography, he and Corden wrapped it all up with some "deep breaths" and bubbles, naturally.

More Like This
Reese Witherspoon’s Son Deacon Is Officially An Actor & Is Working With One Of His Mom's Besties
Drake Shared A Photo Of His New Face Tattoo & It's A Sweet Tribute To His Mom
Anne Heche Remembered As "Loving Mother" To Her Two Sons After Her Death At 53
Dan Levy Just Proved He's The Ultimate Uncle With This Perfect, Sweet Answer