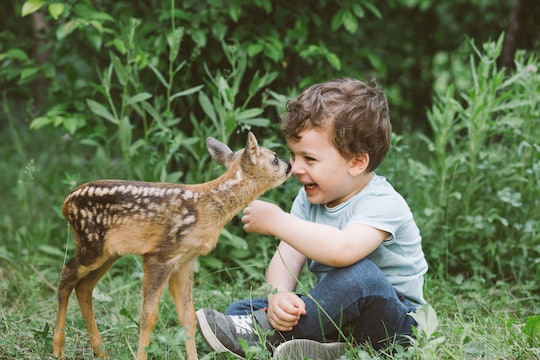 Toddlers Who Talk To Their Penises

We were driving around running errands one Saturday last spring when out of the blue my 3-year-old son announced, “My penis is talking.”

Parenting is a minefield of WTF moments, but this was an entirely new level. In an instant we’d gone from stressing over sleep schedules and worrying about my son’s all-peanut butter diet to dealing with talking genitalia? I like to think I’m a pretty progressive gal, but nothing in the Woke Mom toolkit had prepared me to handle a chatty phallus.

Sweet tiny baby Jesus, as if parenting weren’t fraught enough, what with childcare costs, school choices, and the general business of keeping a small human alive day in and day out, now we suddenly found ourselves on the edge of the sex-ed diving board about to belly flop into the chilly waters of the awkward-talks pool. I could have sworn What to Expect When You’re Expecting promised I’d have at least 10 years before having to deal with this ish.

I discovered I wasn’t alone. My boy mom friends were also dipping their toes into the shallow end of the penis fascination puddle.

“We have these foam letters that stick to the tub and Rudy will take the 'O' and try to fit it on his penis. Ahh, special times,” my friend Gemma shared. (Parent names have been changed to protect the innocent from teenage retaliation when their children discover how to Google themselves.)

“There was one time, like in the six-months range, when James ‘discovered’ his penis during a diaper change. He pulled on it so hard I screamed ‘James is going to pull his penis off. Help me!’ The other kids still talk about the day James tried to pull his wiener off,” my friend Becca said.

For my pal Alexandra, a sudden surge in testosterone came in the form of her son Jack’s newfound interest in reading. “We were visiting my husband’s parents this weekend. They had the Sports Illustrated Swimsuit issue on the coffee table in his family room (with about 52,857,630 other magazines). Jack picked it up, proclaimed it his favorite magazine, and proceeded to 'read' it ALL. WEEKEND. It was so odd and awkward. We tried asking him what about the magazine he liked but all he would say was ‘I like to look at the girls in swimsuits.’ I’m so not ready for this. He’s only 5!”

Meanwhile, my friend Shelby is dealing with a special kind of self-love. “Calvin repeats ‘my penis’ over and over again whilst staring lovingly at himself during bath... much like I'm sure a large percentage of the male population does,” she said.

So what’s a parent to do?

The first thing is to allow your child to dictate conversations and see where they go.

I want my son to be a body-positive boy, to look at himself in the mirror and not suffer the crippling negative self talk I experienced in middle and high school. And want him to feel good in his sexuality, to have beautiful, consensual relationships, no matter who he grows up to love. But that’s a long way down the line and right now we’ve got an imaginary friend in his pants to deal with.

Fortunately, another mom has some great advice. Sexuality and relationships expert and AASECT-certified sex educator, Dr. Logan Levkoff, says that even at the tender age of 4, the time is right to start creating a comfortable environment to discuss sexuality.

“The first thing is to allow your child to dictate conversations and see where they go,” she says. Don’t shy away from these opportunities, rather approach them with an open mind and compassion because, as she says, they’re trying to make sense of the world around them.

As for the talking penis thing, Levkoff says a great segue would have been to say, “‘Your penis is saying yes? How often is that?’ You could even say, ‘There might be times when you or your penis say no. The cool thing is, your body — your penis, your nose, your shoulders — are yours and you have the right to make decisions for it and decide if it says yes or no.”

Levkoff encourages parents to avoid the fear route when awkward moments present themselves. “I worked really hard with my own children, who are now 10 and 14, to avoid making it about like the scary boogeyman because then there winds up being so much guilt and shame about bodies,” she says. “Instead, encourage kids to be like, ‘Wow, this is mine. And I get to make decisions about it and if I ever feel uncomfortable, I know who to talk to about it.’”

Of course, becoming comfortable as a parent discussing sexuality, gender identity, and relationships might not happen overnight, but the more you embrace the topic, the easier it gets.

The challenge with the word 'inappropriate' is that we, as parents and caregivers and teachers and adults, tend to use it when we want to shut down a conversation.

“We tend to shy away from talking to kids about issues of sexuality because we fear that it takes away some sort of ridiculous notion of innocence. But to me, innocence is taken away when a kid asks you questions or talks about things and you either lie to them deliberately or inadvertently and then they learn about it from someone or somewhere else, which is typically technology—that's a loss of innocence” says Levkoff. “But asking questions about bodies and sex and relationships, that's part of being a human being and those are exactly the questions they should be asking.”

So, a few tips as you tumble down the sex-talk slip n’ slide:

Explain to your kids that we all have a lot in common. Sure, we have a few body parts that are different, but we’re pretty darn similar too, we’re just arranged differently.

Acknowledge how cool bodies are. Celebrate how amazing that is and you’ll lay a foundation of body positivity.

Avoid the use of the word “inappropriate” when it comes to children’s behavior or questions you may not want to answer at, says, Starbucks. “The challenge with the word 'inappropriate' is that we, as parents and caregivers and teachers and adults, tend to use it when we want to shut down a conversation. And when we shut it down we typically don't go back to it,” she says. Instead, Levkoff encourages parents to say, “Hey, you know what? You're asking such great questions. I can't concentrate on that right now, but the minute we are in the car, we’ll talk about it.’ Then you have to make sure you follow through.”

Perhaps the best news from the woman who has made a career out of helping people have honest conversations about sex is this: laughter is OK.

“Kids say the most amazing things,” reminds Levkoff. “And it’s our reaction that changes how they see the world — whether they continue to see it through an ongoing smile and curiosity, or not.”