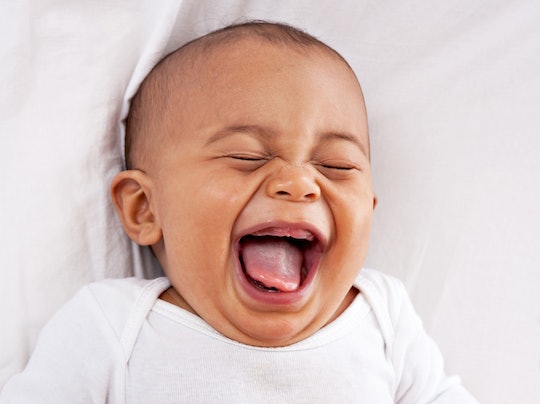 Choosing a name for your baby is a daunting task. It's so permanent, so important. Some expectant parents may need all the help they can get to find a name that is at once current, interesting, unique, and meaningful. So if you happen to be expecting a baby in the new year, you're going to want to check out the top baby name predictions for 2020. There are some creative choices you might not have considered, some celebrity nods, and faithful favorites that are expected to make a comeback next year.

The popular baby name site Nameberry released its most popular choices for 2020 earlier this month. The website compiled the list by looking at the most searched names on its site for the past year. And as has been the case in previous years, parents are still loving baby names that start with an "A" like the number one most popular choice for girls, "Adah" and top pick for boys, "Austin."

In fact, girls names that start with "Ad" like Ada, Adelaide, and Adelle are all quite popular. Some other choices for the top 10 list are new additions, and perhaps based on some celebrity fandom. For instance, the number two name for girls in 2020 is "Reese," sort of like Reese Witherspoon. Although to be fair, this could also be a nod to Reese's Peanut Butter Cups as well — they were the most popular Halloween candy this year, after all.

The rest of the names rounding out the top 10 girls names were Mika, Paisley, Amina (which is the name of the mother of the prophet Mohammed), Teagan, Nova, Aura, Pearl, and Billie. It's perfectly possible that singer Billie Eilish influenced this new popular name, while fans of Teen Mom OG will recognize the name Nova as the daughter of stars Catelynn and Tyler Baltierra. The name Pearl has been in decline since the 1920s, but has been making a comeback recently as some parents look for classic, old-fashioned names.

When it comes to boys' names, things got a little less traditional. The top 10 names run the gamut from preppy to unique with names like Alva, Acacius, Tate, Diego, Easton, Lucius, Cash, Ash, and Luca joining Austin as most popular. There appears to be a significant European influence, but also a bit of a cowboy theme with Cash, which was perhaps influenced by late country singer Johnny Cash.

As for gender neutral names, the top 10 list featured some unique and unisex monikers including Phoenix, which is the name of Jillian Michaels' son.

Parents have the world at their fingertips when it comes to choosing baby names, and sometimes too much choice can be confusing. Hopefully 2020's crop of what are expected to be popular baby names can help people find a way to narrow things down just a little.