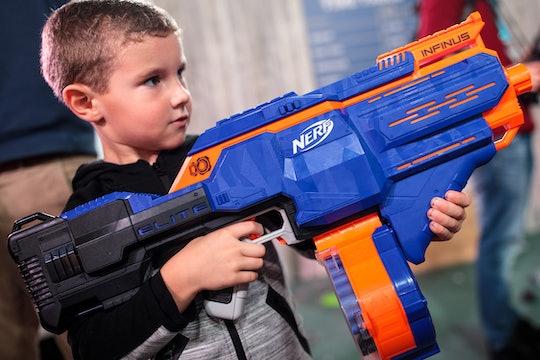 Town's Toy Gun Exchange For Presents Has The Internet Fired Up

It's one of the most heated debates of our generation: gun safety. The debate over access to firearms in America has been dividing swathes of communities across the country for decades, and it doesn't look to be ending any time soon. For instance, when this town in New York organized a toy gun exchange for presents recently, the internet was divided.

The town on Hempstead, which is in the Long Island area of New York, decided to offer area kids the opportunity to exchange their toy guns for new presents. The idea was initially brought forth by former New York City police officer Sean Acosta, who was on hand to support the New York Toy Gun Exchange Program in the village of Hempstead before Christmas. As per ABC 7, local kids were invited to bring Nerf guns, water pistols, and all other replica toy guns to be exchanged for a new present. Why? As Hempstead Village Trustee LaMont Johnson told the news outlet, "The purpose is to offer safe alternative to toy guns. We don't want the kids playing with guns. Guns are dangerous." Hempstead Village Mayor Don Ryan supported the endeavor, telling ABC 7 that he believed "Saying no to guns is important - even toy guns."

Now, it's important to note that children were not forced to offer up their toy guns; this was a voluntary toy gun exchange. And this isn't even the first year that Hempstead Village has taken part in this program; the village has been successfully providing the toy gun exchange for the community for three years, as CafeMom reported. Because they are genuinely concerned that children learn about gun safety. After all, a 2015 study performed by the Children's Hospital of Philadelphia found that a full 89 percent of child deaths by gunfire were accidental, and happened at home.

With statistics like that in mind, Acosta, who brought the gifts along as part of the exchange program, told the 50 children who arrived to swap out their toy guns, as per People:

"I want to make sure when you grow up nothing happens to you."

Not everyone loved the idea, as you can imagine. Some felt the concept was unrealistic and went too far in an attempt to protect children from potentially hurting themselves or others by mistaking a real gun for a toy.

"Interesting. I bought my daughter a toy gun for Christmas, and fully believe she should learn to properly use firearms. She wants a B.B. gun, and I have zero problems with it."

"Or you could use the toy guns to start teaching proper firearm handling and safety."

"Why not teach gun safety?"

Other social media users were more supportive of the toy gun exchange.

"This is a great idea! My kids were never allowed to treat guns as a toy. They both grew up to use guns ... own guns and respect guns. It shouldn't be a right. It should be a privilege. And it should go to the people responsible enough NOT to abuse it."

"These kids are too little for toy guns. I say this because the boy I babysit is five and his first action is to aim it at someone's face. He doesn't realize that it's a toy yes, but it shouldn't be like that. Children have no clue, it's up to us to teach them."

At the end of the day, every parent has to make their own decisions about the sort of toys their kids play with. And if some parents don't want their kids to play with toy guns?

Live and let live, everyone.