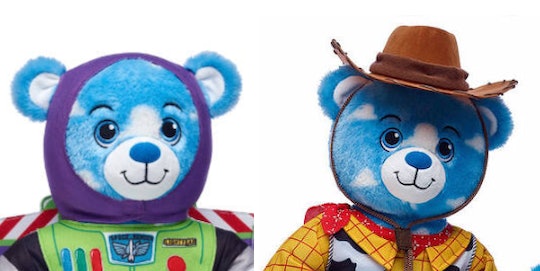 If you thought your kid's excitement for the next Toy Story movie couldn't get any higher, think again. Build-A-Bear just launched a Toy Story 4 collection that features a one-of-a-kind bear that can be dressed up as Woody or Buzz, as well as other stuffed animals based on characters directly from the movie. They're so cute, even grownup Toy Story fans won't be able to resist.

As I'm sure you're aware, the final installment of the Toy Story franchise comes out June 21, and all your fave characters from the first three movies are set to return, based on the trailers, anyway. Collective excitement for the movie's release is at its peak, and toymakers have been feeding that energy by cranking out everything from action figures to interactive space gear in an attempt to appease Buzz and Woody enthusiasts who just can't wait for the day they can finally watch them on screen again. Seriously, even McDonalds has Toy Story 4 products in their Happy Meals right now; Andy's fave friends are everywhere.

Build-A-Bear is the latest brand to get in on the action with their Toy Story 4 collection, which allows kids to combine their love of the Disney classic and the fun of making their own teddy bear. As I mentioned, the collection features a special Toy Story bear who has the iconic Toy Story cloud blue print on his fur, the franchise logo on his paw, and is a certified cutie. I mean, just look at him.

If I was 8 years old, I would be scrounging up every last allowance dollar I had to get my hands on one of these. As if the bear wasn't cute enough alone, you can buy the bear with a sound chip that will either say six of Woody's or Buzz's lines from the movie. You can listen to the actual phrases on the Build-A-Bear site.

The collection also includes Woody and Buzz costumes, accessory plushes that are based on characters directly from the movie and pajamas that resemble the outfits the aliens from the claw machine wear. And if your kiddo is more into representation than costume play, there's a Toy Story 4 t-shirt that any Build-A-Bear can wear featuring characters from the movie, so everyone will know they're a fan of the coolest toy squad around.

And for fans of the original movie, there's also a Disney and Pixar Toy Story 4 Bo Peep Gift Set featuring Pawlette™, the Build-A-Bear bunny. The ensemble shows off the updated look Bo Peep gets in the newest movie, which most notably includes pants. Of course, the outfit can be bought separately and will fit on any Build-A-Bear stuffed animal, but it does look awfully cute on Pawlette™.

Prices vary for items in the collection, but I'd recommend getting one of the gift sets if you know your little one is going to want it all. For instance, the Disney and Pixar Toy Story 4 Bear and Woody Costume with sound gift set retails for $63, but it includes the bear, a sound chip, Woody's costume, and cowboy boots. Alternatively the Duck and Bunny plushes are $14 together, so you can enjoy the fun on a budget too.

Check out the whole collection on the Build-A-Bear site, or head to one of their workshops. Either way, get your movie fanatic the best bear in town, and they'll be ready to head to infinity and beyond come June 21.