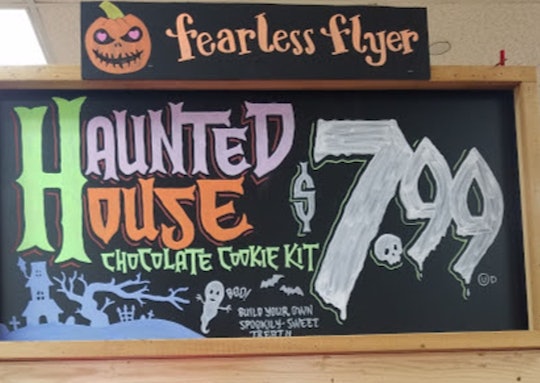 Talk about the most wonderful time of the year. Autumn products are finally filling our favorite stores, casting a cinnamon-and-cloves spell over everything in their path. Trader Joe's not only has all the pumpkin-spice foods you could possibly hope for, but they've also brought back their Haunted House Chocolate Cookie Kit. Halloween: officially perfect.

A seasonal favorite since at least 2016 (which is as far back as I can find a reference to it, according to One Page Wonder), the edible Halloween residence comes complete with a seven-piece chocolate cookie set (six "house" components, plus a ghost that is presumably its owner), plus two bags of premade black and orange icing, and an assortment of home decorations that include candy bats and bones, small edible beads, and a batch of jelly beans.

Just in case you were worried about the nutritional value of all this sweet goodness, Trader Joe's assures buyers that their jelly beans are "colored with black currants, carrots, pumpkins, radishes, hibiscus, and other fruit & vegetable juices." Why, it's practically a salad! You owe it to yourself and your family to pick up a package, knowing it has all your recommended daily allowance of hibiscus and radish juice.

This fun and family-friendly craft is specific to Halloween (though it's kind of cool to imagine making it in the middle of the winter), though most people associate cookie houses with Christmas. It all dates back to the invention of gingerbread in ancient Greece, which eventually led to the creation of elaborately decorated hard gingerbread cookies that were all the rage in medieval Europe.

Gingerbread houses were a product of 16th-century Germany, according to PBS, and then enjoyed a widespread boost of popularity after the Brothers Grimm wrote Hansel and Gretel. The fact that the fairy tale's gingerbread house was created by an evil witch to lure children to their doom doesn't seem to have done much to deter families from creating their own yummy spice-cookie holiday structures. On the other hand, an edible house with a creepy Halloween theme makes perfect sense when you think about the story. Isn't it way more appropriate to use the macabre treat as a tie-in to the holiday devoted to frights, rather than trying to pretty it up and putting a Santa spin on it just a couple of months later?

What's even better about this house kit is that it's so family-friendly. This time of year can be tough on parents when their children are afraid of Halloween. The proliferation of blood-soaked zombies, spooky skeletons, and downright sick clowns haunting all the houses in the neighborhood can make the holiday a nightmare for sensitive children. (I used to have to shield my daughter's eyes every time we walked down certain streets in October.) Some kids can get so creeped out that they won't even get into a costume.

But even children who find Halloween more of a trick than a treat will get into the cookie-house spirit. There's nothing scary about it — not a spider or ghoul in sight, the candy bats are nonthreatening, and you can decorate the cookie ghost to be more of a Casper than a Ghostbusters spook. Kids will enjoy helping put up the walls and roof, then using the icing and candies to hold everything together.

At just $8 a box, the Halloween chocolate cookie haunted house set is a bargain, not to mention a perfect excuse to sit down with the kids and enjoy a little quality time. (Don't forget to pick up some pumpkin-themed treats while you're at Trader Joe's to snack on while you create.) You could even add your own special touches to your haunted mansion, such as using some of your own holiday candy collection to make the house look even fancier. Whatever you decide to do, you're sure to end up with a cool-looking house that you'll all be proud to display — and then eat once the holiday is over.